Researchers have uncovered further evidence of a system in the brain that persistently maintains memories for long periods of time.

Paradoxically, it works in the same way as mechanisms that cause mad cow disease, kuru, and other degenerative brain diseases.

In four papers published in Neuron and Cell Reports, the laboratory of Eric Kandel at Columbia University Medical Center (CUMC) show how prion-like proteins - similar to the prions behind mad cow disease in cattle and Creutzfeld-Jakob disease in humans - are critical for maintaining long-term memories in mice, and probably in other mammals. 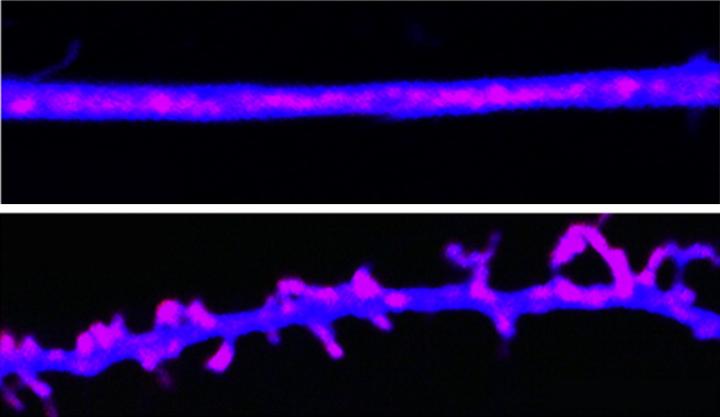 Memories are stored for the long-term with the help of prion-like proteins called CPEB. CPEB prions aggregate and maintain synapses that recorded the memory ["spines" in the bottom image]. When CPEB prions are not present or are inactivated, the synapses collapse and the memory fades. Credit: Lab of David Sulzer, Ph.D., Columbia University Medical Center

When long-term memories are created in the brain, new connections are made between neurons to store the memory. But those physical connections must be maintained for a memory to persist, or else they will disintegrate and the memory will disappear within days. Many researchers have searched for molecules that maintain long-term memory, but their identity has remained elusive.

These memory molecules are a normal version of prion proteins, according to research led by Nobel laureate Eric Kandel, MD, who is University Professor&Kavli Professor of Brain Science, co-director of Columbia's Mortimer B. Zuckerman Mind Brain Behavior Institute, director of the Kavli Institute for Brain Science, and senior investigator, Howard Hughes Medical Institute, at CUMC.

Prions--derived from the words protein infectious particles--are a unique class of proteins. Unlike other proteins, they are not only able to self-propagate but also to induce other proteins to take on their alternative shape. When prions form in a cell, notably in a neuron, they cause damage by grouping together in sticky aggregates that disrupt cellular processes. Prion aggregates are highly stable and accumulate in infected tissue, causing tissue damage and cell death. The dying cell releases the prion proteins, which are then taken up by other cells - and are thus considered infectious. These abnormal proteins are known to cause mad cow disease (bovine spongiform encephalopathy). They also have been linked to a variety of neurodegenerative diseases, including Alzheimer's, Parkinson's, and Huntington's.

In contrast, functional prion proteins can play a physiological role in the cell and do not contribute to disease.

Kausik Si and Dr. Kandel first identified functional prions in the giant sea slug (Aplysia) and found they contribute to the maintenance of memory storage. More recently, the Kandel laboratory searched for and found a similar protein in mice, called CPEB3.

In one of many experiments described in the paper by Luana Fioriti, the researchers challenged mice to repeatedly navigate a maze, allowing the animals to create a long-term memory. But when the researchers knocked out the animal's CPEB3 gene two weeks after the memory was made, the memory disappeared.

The researchers then discovered how CPEB3 works inside the neurons to maintain long-term memories. "Like disease-causing prions, functional prions come in two varieties, a soluble form and a form that creates aggregates," said. Kandel. "When we learn something and form long-term memories, new synaptic connections are made, the soluble prions in those synapses are converted into aggregated prions. The aggregated prions turn on protein synthesis necessary to maintain the memory."

As long as these aggregates are present, Kandel says, long-term memories persist. Prion aggregates renew themselves by continually recruiting newly made soluble prions into the aggregates. "This ongoing maintenance is crucial," said Dr. Kandel. "It's how you remember, for example, your first love for the rest of your life."

A similar protein exists in humans, suggesting that the same mechanism is at work in the human brain, but more research is needed. "It's possible that it has the same role in memory, but until this has been examined, we won't know," said Dr. Kandel.

"There are probably other regulatory components involved," he added. "Long-term memory is a complicated process, so I doubt this is the only important factor.