The Large Underground Xenon (LUX) dark matter experiment, which operates beneath a mile of rock at the Sanford Underground Research Facility in the Black Hills of South Dakota, has completed its search for the missing matter of the universe yielding no trace of a dark matter particle.

LUX's extreme sensitivity makes the team confident that if dark matter particles had interacted with the LUX's xenon target, the detector would almost certainly have seen them. In a 'what you don't find is important also' sense, these new limits on dark matter detection will allow scientists to eliminate many potential models for dark matter particles.

Dark matter is believed to account for more than 80 percent of the mass in the universe. Scientists are confident of its existence because the effects of its gravity can be seen in the rotation of galaxies and in the way light bends as it travels through the universe, but experiments have yet to make direct contact with a dark matter particle. The LUX experiment was designed to look for weakly interacting massive particles, or WIMPs, the leading theoretical candidate for a dark matter particle. If the WIMP idea is correct, billions of these particles pass through your hand every second, and also through the Earth and everything on it. But because WIMPs interact so weakly with ordinary matter, this ghostly traverse goes entirely unnoticed. 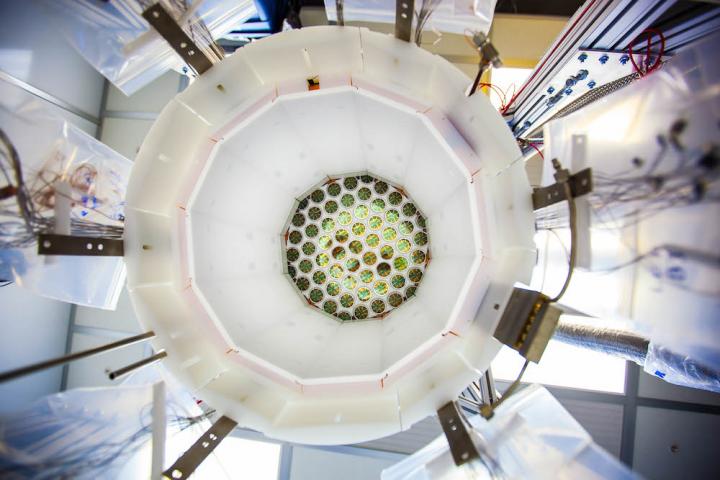 The LUX detector consists of a third-of-a-ton of cooled liquid xenon surrounded by powerful sensors designed to detect the tiny flash of light and electrical charge emitted if a WIMP collides with a xenon atom within the tank. The detector's location at Sanford Lab beneath a mile of rock, and inside a 72,000-gallon, high-purity water tank, helps shield it from cosmic rays and other radiation that would interfere with a dark matter signal.

The 20-month run of LUX represents one of the largest exposures ever collected by a dark matter experiment, the researchers said.

"LUX has delivered the world's best search sensitivity since its first run in 2013," said Rick Gaitskell, professor of physics at Brown University and co-spokesperson for the LUX experiment. "With this final result from the 2014-2016 run, the scientists of the LUX Collaboration have pushed the sensitivity of the instrument to a final performance level that is 4 times better than originally expected. It would have been marvelous if the improved sensitivity had also delivered a clear dark matter signal. However, what we have observed is consistent with background alone."