News Staff
Magnetic fields such as those generated by overhead power lines are considered a potential health risk because epidemiological papers correlate them to neurodegenerative disorders such as Alzheimer's disease and amyotrophic lateral sclerosis (ALS).

Like other concepts that catch the attention of a certain segment of the public, such as GMOs causing cancer, vaccines causing autism, or cell phones causing cancer, it relies on a kernel of scientific truth that is extrapolated out to be a broad effect: Our bodies run on our internal electricity and magnetic fields shape how electricity behaves.

But does that mean power lines are having a drastic impact? Only in papers where scholars find a cluster of X and then find the presence of Y and suggest a correlation, which is invariably portrayed in the media and on advocacy sites as causation.

A recent study produced no evidence that low-frequency fields can cause exacerbation or accelerated disease development in relevant mouse models. Neither learning behavior nor known disease mechanisms at the cellular level were affected. 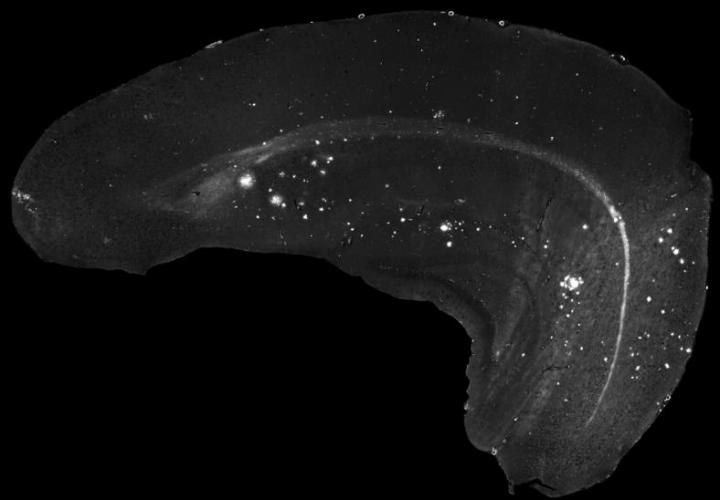 Age-related deposits of amyloid-beta protein develop in the brain. This protein can be labeled and made visible under a fluorescence microscope. Photo/©: Albrecht Clement

The etiology of age-related neurodegenerative disorders such as Alzheimer's disease and amyotrophic lateral sclerosis is not yet understood. Less than 10 percent of patients have a matching family history, which means that the vast proportion of patients develop these diseases for so far unknown reasons. Age-related changes in metabolism, genetic predisposition, or environmental factors have been proposed as possible risk factors. Some epidemiological studies, which haven't actually measured or tested anyone, suggest that low-frequency magnetic fields that are generated, for example, by the alternating current (50 Hz) in power lines and electrical appliances while they are operating, may promote the development of these diseases. Other studies say exposure to magnetic fields does not represent a risk factor in connection with Alzheimer's disease or ALS. Political bodies such as the World Health Organization (WHO) categorize low-frequency magnetic fields as a possible risk factor in Alzheimer's disease despite any evidence.

A new long-term study in relevant animal models that controlled exposure to low-frequency magnetic fields over a period of up to 18 months found it does not influence the onset and progression of Alzheimer's disease and ALS.

A detailed analysis of the characteristic features of each disease showed that their development was in no way related to exposure to low-frequency magnetic fields. In the case of Alzheimer's disease, this also applied to the formation of pathological amyloid-beta protein plaque in the brain while in the case of ALS, there was no effect on the levels of proteins damaged by oxidative stress in the spinal cord.

The inflammatory response in the nervous system that occurs in the course of both diseases was also unaffected during exposure. Moreover, neither learning behavior as an indicator of the progression of Alzheimer's disease nor the onset and the duration of ALS were influenced by the magnetic fields.

"These results show that exposure to low-frequency magnetic fields has no effect on either disease-related molecular processes or on potential, as yet unknown, disease mechanisms," said Dr. Albrecht Clement, principal investigator at the Institute of Pathobiochemistry at the Mainz University Medical Center. "Our findings thus tend to confirm the results of previous epidemiological studies that indicate no damaging effects of low-frequency magnetic fields."