News Staff
Four billion years ago, a young Mars had enough water to bury its whole surface under 400 feet of ocean, but it is more likely that, as on Earth, it pooled. In the case of Mars, it probably formed an ocean occupying almost half of Mars’s northern hemisphere, reaching a mile deep in some places.

This new finding is based on detailed observations of two slightly different forms of water in Mars’s atmosphere. One is the familiar form of water, made with two hydrogen atoms and one oxygen, H2O. The other is HDO, or semi-heavy water, a naturally occurring variation in which one hydrogen atom is replaced by a heavier form, called deuterium. 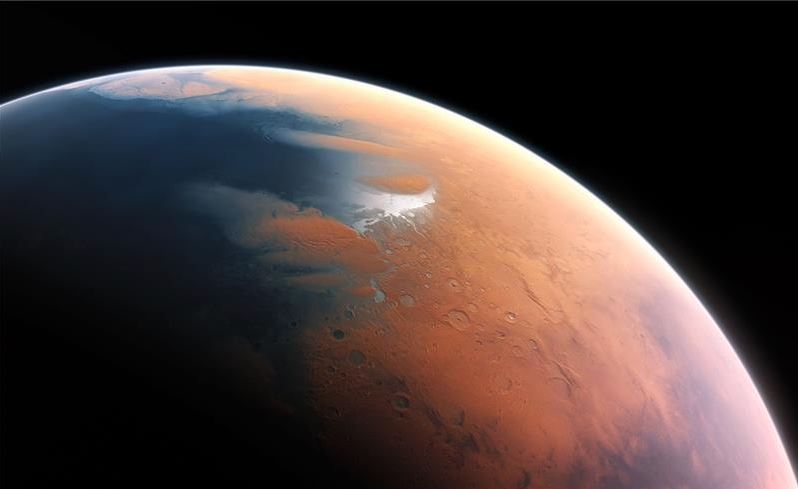 How Mars may have looked about four billion years ago. Credit: ESO/M. Kornmesser

The researchers distinguished the chemical signatures of the two types of water using ESO’s Very Large Telescope in Chile, along with instruments at the W. M. Keck Observatory and the NASA Infrared Telescope Facility in Hawaii. By comparing the ratio of HDO to H2O, scientists can measure by how much the fraction of HDO has increased and thus determine how much water has escaped into space. This in turn allows the amount of water on Mars at earlier times to be estimated.

In the study, the team mapped the distribution of H2O and HDO repeatedly over nearly six Earth years — equal to about three Mars years — producing global snapshots of each, as well as their ratio. The maps reveal seasonal changes and microclimates, even though modern Mars is essentially a desert.

“Our study provides a solid estimate of how much water Mars once had, by determining how much water was lost to space,” said Geronimo Villanueva, a scientist at NASA’s Goddard Space Flight Center in Greenbelt, Maryland and lead author of the new paper. “With this work, we can better understand the history of water on Mars.”

Ulli Kaeufl of ESO, who was responsible for building one of the instruments used in this study and is a co-author of the new paper, adds, "I am again overwhelmed by how much power there is in remote sensing on other planets using astronomical telescopes: we found an ancient ocean more than 100 million kilometres away!"

The team was especially interested in regions near the north and south poles, because the polar ice caps are the planet’s largest known reservoir of water. The water stored there is thought to document the evolution of Mars’s water from the wet Noachian period, which ended about 3.7 billion years ago, to the present.

The new results show that atmospheric water in the near-polar region was enriched in HDO by a factor of seven relative to Earth’s ocean water, implying that water in Mars’s permanent ice caps is enriched eight-fold. Mars must have lost a volume of water 6.5 times larger than the present polar caps to provide such a high level of enrichment. The volume of Mars’s early ocean must have been at least 20 million cubic kilometers.

Based on the surface of Mars today, a likely location for this water would be the Northern Plains, which have long been considered a good candidate because of their low-lying ground. An ancient ocean there would have covered 19% of the planet’s surface — by comparison, the Atlantic Ocean occupies 17% of the Earth’s surface.

“With Mars losing that much water, the planet was very likely wet for a longer period of time than previously thought, suggesting the planet might have been habitable for longer,” said Michael Mumma, a senior scientist at Goddard and the second author on the paper.

It is possible that Mars once had even more water, some of which may have been deposited below the surface. Because the new maps reveal microclimates and changes in the atmospheric water content over time, they may also prove to be useful in the continuing search for underground water.
News Articles
More Articles All Articles
About