I’ve probably lost count of the number of ‘WATER ON MARS’ and related headlines I’ve read over the years. It’s an interesting case study of how a scientific theory gains support as more evidence is collected, until it becomes something ‘that is known’.

But last week we heard evidence that Mars has lost some water – an entire oceans worth in fact.

The history of ‘water on Mars’ is pretty interesting, if we start from the first time that Earth astronomers claimed to have seen features on our neighbour in the 19th century. Know as ‘Canali’ as they were first charted by and Italian astronomer Giovanni Schiaparelli. Speculation was rife for two centuries after as to what had carved these ‘canals’ on Mars, (for instance the eminent Percy Lowell was convinced that they were carved by an intelligent society) - but they were later shown to be an optical illusion. 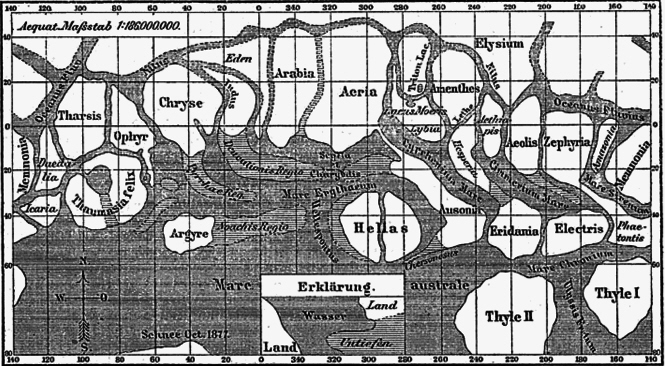 Once we got a closer look of the surface with orbiting spacecraft, it became pretty clear there were no ‘canali’. However, the Mariner 9 craft in 1971 spotted many smaller scale features that could only have been formed from water erosion. This, first direct evidence, prompted the later Viking lander to take a closer look. Since then we have collected quite a lot of evidence about water and its processes on the surface of Mars all the way to Curiosity’s direct evidence that there’s water in the minerals there.

However, recently published results have presented the strongest evidence yet that there used to be much more water on Mars. All from looking at what’s left.

Using entirely Earth based observations a group has even been able to chart where in Mars has lost the most water. This has been done by tracking the water molecule (H2O), and it’s deuterated equivalent HDO.

Deuterium is ‘heavy hydrogen’, an isotope of our lightest element with an extra neutron in its center. It exists in our own ocean, where about 0.0156 % of the hydrogen atoms in water are actually their heavier counterpart. The ratio between the amount of hydrogen and deuterium on Earth gives a baseline to compare ratios on other terrestrial planets.

Using the appropriately named Very Large Telescope (VLT) and the Keck telescope, the researchers charted the abundance of H2O and HDO over the Mars surface. This then enabled them to map out the deuterium/hydrogen (D/H) ratio mapped across the how of Mars.

Not only did they manage to chart seasonal variations that say much about the movement of water molecules, but also overall they noticed large regions that had a much higher D/H ratio than anticipated. Such enrichment occurs when water is lost, as H2O is more likely to evaporate than HDO.

Using their results on the D/H ratios they estimate that Mars at one point had a layer of water 137 m deep. The thought is that 4.5 billion years ago this amount of water would be enough to fill the Vastitas Borealis, the Northern basin that covers most of the upper hemisphere of the red planet. A great rolling ocean, which would have made up 17 % of Mars’ surface.

Now the big puzzle is, where did all that water go? There’s a number of spacecrafts trying to figure this out – including last years’ arrivals MAVEN and MOM. Hopefully, the measurements they are making will show where the water has gone – the likely candidate being a loss through Mars’ tentative atmosphere.

But it does make you think, if Mars still had this ocean, would we have visited the red planet by now? Instead of dry ‘canali’, what if Schiaparelli had seen an ocean? I’m willing to bet that our whole perspective of the red planet would be different. Instead of a place of mystery , we would have perceived it as to a planet a lot like our own – ready to be explored. And given an ocean for 4.5 billion years, it’s rather fun to imagine who or what may have been living there waiting for our visit.

By Helen Maynard-Casely, Instrument Scientist at Australian Nuclear Science and Technology Organisation. This article was originally published on The Conversation. Read the original article.
The Conversation
More Articles All Articles
About