A team of Canadian and U.S. researchers have uncovered evidence that ragged, kilometre-high undulating features on the surface of Mars were shorelines of massive ancient oceans that once covered one-third of the planet in water.

Mars’ oceanic past has been debated since Viking spacecraft images from the 1970’s pinpointed features that seemed similar to shorelines on the Earth. However, in the 1990s, NASA’s Mars Global Surveyor revealed that peaks and dips along these features had topographic differences of nearly 3 kilometres. Since old shorelines on Earth remain nearly flat relative to sea level, there was widespread skepticism that these features represented ancient shorelines.

Researchers found that the topography can in fact be explained by a shift in the planet’s spin axis within the past 2 to 3 billion years. This shift in the rotation pole deformed shorelines that surrounded the long-vanished Arabia and Deuteronilus oceans.

“At some point in the planet’s history, a major shift of mass caused the pole to wander about 50 degrees towards its current location and the resulting change in orientation dramatically warped the topography and the ancient shorelines,” explains U of T Professor of Physics Jerry Mitrovica, Director of the Earth System Evolution Program of the Canadian Institute for Advanced Research and one of the study’s authors. As evidence, Mitrovica points to the location of Mars’ volcano Tharsis – the largest in the solar system – a feature so massive that it will always reorient itself to sit on the planet’s equator. The inferred trajectory of the pole’s path perfectly preserves Tharsis’s equatorial position. “The chances of this happening randomly are less 1 in 10,000,” Mitrovica says. 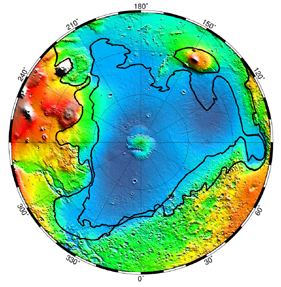 Mars Global Surveyor map of the ancient oceans on Mars

The study’s lead author, Dr. Taylor Perron of Harvard University, explains that on planets such as Mars and Earth that have an outer shell, or lithosphere, a change in the spin axis can cause the solid surface to deform differently than the sea surface and this explains Mars’s warped shorelines. Perron, who completed his research while at UC Berkeley, calculated that Mars’ elastic crust could account for the kilometre-high elevation differences in the shorelines. “What we don’t know is what caused the poles to shift on Mars and what happened to the water,” Perron says. “The ocean may have been gradually converted into water vapor, moved to higher elevations, and flowed beneath the surface. There could be a large mass of water deep within Mars.”