What Makes One Alternate Earth More Habitable Than Another?
By The Conversation | January 6th 2015 08:00 PM | Print | E-mail 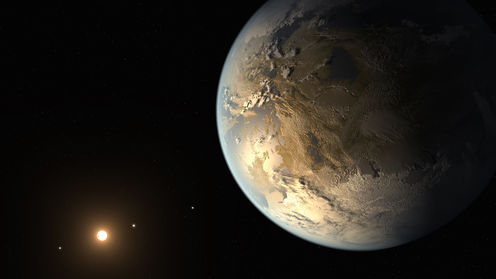 Artist's impression of an Earth-sized planet in the Kepler 186 system. But what makes one planet more habitable than another? NASA Ames/SETI Institute/JPL-Caltech

When it comes to finding the right kind of planet to target in the search for life elsewhere in the universe, the size of the planet matters.

All planets are believed to form by a process of competitive cannibalism, in a disk of material around a nascent star. Small pieces of dust collide and grow, devouring their neighbors. As they get larger, their ability to consume all around them increases and their growth accelerates.

If a planet swells to more than around ten times the mass of the Earth before the nuclear furnace within its host ignites, it will be able to accrete vast amounts of gas. It will grow to become a gas giant, like Jupiter and Saturn in our own solar system. Such planets would definitely not be good places to look for life.

At the other end of the spectrum, an object that is too small and of too low a mass (such as Mercury, or Earth’s moon) won’t have enough gravity to hold an atmosphere. Planets come in all shapes and sizes. But the perfect planet for the search for life must be the right size – not too big and not too small. NASA/JPL-Caltech

This is important because the mass of a planet’s atmosphere will directly influence its climate. The location of the “habitable zone” around a star will therefore be a function of the mass of the planet in question.

A more massive planet, with a more massive atmosphere, will likely have a stronger greenhouse effect. Such a planet would most likely be habitable at distances that would result in smaller planets icing over.

Similarly, a smaller planet, with a thinner atmosphere, will likely be habitable at distances at which the oceans of a more massive world would boil.

While a planet needs to be sufficiently massive to acquire and host a thick enough atmosphere to support life, there is more to the story.

Particularly in their youth, stars are violent hosts. They fling material to space and continually bombard their planets with radiation.

To some degree, that is vital for life. Without the energy the Earth receives from the sun, there would be no light and our planet would be a frozen ice-ball.

But with the blessing of light comes a curse – the wind blowing from a star can tear away the atmosphere of a planet, stripping it to nothingness. Artist’s impression of the effect of a vast stellar flare on the atmosphere of the exoplanet HD 189733b. Stellar activity can strip away the atmosphere of a planet, leaving it barren and lifeless. NASA, ESA, L Calçada

Fortunately for life on Earth, our planet is protected from the worst vagaries of the solar wind by its strong magnetic field.

As the solar wind strikes Earth’s magnetic field, it is deflected around, shielding the planet within. Only the strongest solar storms, and the most energetic particles, can penetrate that shielding.

Cascades of charged particles that penetrate the Earth’s magnetic shield pour down to the poles, causing the magnificent Aurora Borealis and Australis. The Aurora Borealis, imaged here from northern Canada, is the result of charged particles flung outward by the Sun smashing into Earth’s atmosphere. Wikimedia/Kshitijr96, CC BY

But what if the Earth had no magnetic field? The situation would be grave. Our nearest planetary neighbor, Mars, lacks a strong magnetic field and most likely has been unshielded since the early youth of the solar system. That lack of shielding has caused the planet to pay a terrible price – Mars’s once thick atmosphere has been whittled away to almost nothing.

The presence of a magnetic field is particularly important during a planet’s youth – when its host star is still young and excitable, and energetically shedding material to space. As stars age they usually mellow but remain capable of slowly stripping planets of their gaseous shrouds.

It is clear, therefore, that for a planet to be considered a promising target in the search for life, it must possess a strong magnetic shield to protect its atmosphere. But how does a planet like the Earth maintain a magnetic field sufficiently strong, and for sufficiently long, to offer that kind of protection?

The Earth’s magnetic field is driven by a colossal dynamo, deep in the Earth’s outer core. It is thought that this dynamo is driven by convection currents in that region of our planet’s interior. But therein lies a problem – how can you maintain convection inside a planet over periods of billions of years? The Earth’s magnetosphere protects our atmosphere from the erosive power of the Solar wind. But without convection in Earth’s core, that field would not exist. NASA/GSFC

The interior of the Earth is very hot, primarily as a result of the decay of radioactive elements trapped in the interior. Our planet slowly sheds that heat to space through its crust, with the result that the surface layers of our planet’s interior are cooler than those near the core.

In order to setup and maintain convection, you need a large temperature difference between two locations. So the convection currents in the Earth’s mantle are the result of the fact that the part of the mantle just beneath the crust is far cooler than that next to the core.

But here’s the strange thing. If the Earth didn’t have plate tectonics, the upper layers of the mantle would not be able to cool anywhere near as efficiently. With a warmer upper mantle, the temperature difference between that region and the Earth’s deep interior would be smaller, and convection would eventually cease.

And without that convection, the Earth’s dynamo would die, and its magnetic field would weaken and disappear.

It is thought that this is precisely what happened to Mars. At first, the red planet may well have been sufficiently hot inside for a certain degree of tectonic activity to occur. Certainly, the crust of Mars bears evidence of an ancient magnetic field, frozen into the rocks. The topography of Mars, based on observations taken by the Mars Orbiter Laser Altimeter. Despite its famous volcanoes, Mars does not exhibit plate tectonics, which may be tied to the loss of its atmosphere over the past four billion years. NASA/JPL

But Mars is smaller than Earth and so lost its interior heat to space much more quickly. Eventually, it cooled sufficiently that it could not maintain convection, and its magnetic field died down.

At that point, the solar wind began to strip the atmosphere away, while at the same time, chemical processes on the surface were pulling the atmosphere down into the rocks. Without tectonics to recycle the rocks, and to drive the magnetic field, Mars slowly became the world we see today.

In addition to maintaining our planet’s magnetic field, plate tectonics are important for many other reasons, particularly when it comes to the creation of the atmosphere we breath today.

Tectonic activity is clearly important for life on Earth and so would certainly be a key criterion in the search for life elsewhere. But some researchers suggest that the story may be even more complicated than we once thought.

Over the years, a number of studies have suggested that without water, the Earth wouldn’t have plate tectonics – a theory that remains heavily debated.

The general idea is that water acts as a lubricant – either between colliding plates (helping them overcome the friction between them), or within Earth’s mantle (increasing its fluidity, helping it to move, and easing the convection currents therein).

Without water, a planet might have to be somewhat more massive than the Earth to support plate tectonics. Had Earth formed much drier the motion of its plates might have seized long ago, causing convection in the mantle to die, and our atmosphere to be been purged, just like that of Mars.

So, with this theory, we’ve come full circle.

Life itself needs water, but for a planet to keep its atmosphere, it needs a magnetic field.

To maintain a magnetic field, a planet needs a dynamo.

To have a dynamo, it needs plate tectonics.

And to keep plate tectonics, it needs water.