If our planet did not have the ability to store oxygen in the deep reaches of its mantle there would probably be no life on its surface, according to scientists at the University of Bonn who have subjected the mineral majorite to close laboratory examination.

Majorite normally occurs only at a depth of several hundred kilometres under very high pressures and temperatures. The Bonn researchers have now succeeded in demonstrating that, under these conditions, the mineral stores oxygen and performs an important function as an oxygen reservoir. Near the earth's surface the structure breaks down, releasing oxygen, which then binds with hydrogen from the earth's interior to form water. Without this mechanism our "Blue Planet" might well be as dry and inhospitable as Mars. 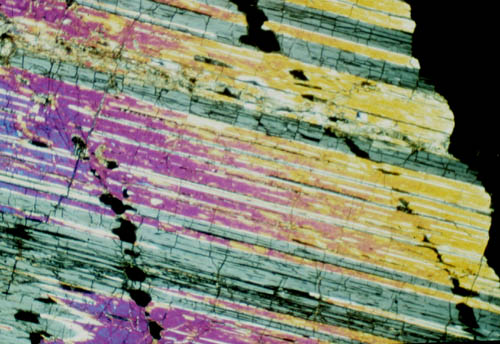 Inverted majorite. This grain originally crystallized as a majoritic garnet in the Transition Zone at a depth of at least 500 km. When it was transported to shallower depths it decomposed into orthopyroxene, (gray), clinopyroxene (yellow to pink) and a silica poor garnet (black). Credit: Joe Smyth, University of Colorado.

The proverbial "solid ground" under our feet is actually in constant flux. At the boundaries between the tectonic plates in what are called the subduction zones this seemingly solid ground is drawn down many hundreds of kilometres into the hot interior. As the material descends it takes with it oxygen, which is bound as iron oxide in the earth's mantle oxygen that derives from the dim distant beginnings of the universe.

Far below the earth's surface high pressures and temperatures prevail. As the mantle material melts the iron oxide undergoes a chemical metamorphosis in which its oxygen component becomes, in a sense, more reactive. Moreover, it changes its medium of transportation, now being incorporated into the exotic mineral majorite which only occurs at these depths. And, as Professor Dr. Christian Ballhaus from the Mineralogical Institute at the Bonn University explains, "The higher the pressure, the more oxygen can be stored by majorite."

We can envisage the majorite as operating like an elevator for oxygen. But this time it moves in the opposite direction: the mineral rises like warm air above a heater. In fact, the experts talk here about "convection". However, nearing the earth's surface the pressure in the mantle becomes too weak to maintain the majorite, which then decomposes. "That's where the stored oxygen is released," notes Ballhaus, whose team is the first to investigate this mechanism under laboratory conditions. "Near the surface it is made available for all the oxidation reactions that are essential for life on earth."

In particular, the earth constantly exudes hydrogen, which combines with this oxygen to form water. Without the "oxygen elevator" in its mantle the earth would probably be a barren planet hostile to life. "According to our findings, planets below a certain size hardly have any chance of forming a stable atmosphere with a high water content," points out Arno Rohrbach, doctoral student in the research team at the Mineralogical Institute. "The pressure in their mantle is just not high enough to store sufficient oxygen in the rock and release it again at the surface."

The bigger the planet, the greater is its capacity to store heat; and, correspondingly, the longer-lasting and more intensive is the convection in its crust. Mars, for example, with a diameter of about 7,000 kilometres (the earth's diameter measures 12,700 km) cooled down long ago to a level at which there is no longer any movement in its mantle. "Its crust has therefore lost the ability to transport oxygen and maintain a lasting water-rich atmosphere," Professor Ballhaus elucidates.

In other respects, too, the size of a planet is decisive for the formation of an atmosphere. Only if temperatures in a planet's interior are high enough for it to have a fluid metal core can it develop a magnetic field. The magnetic field operates like a bastion in the face of solar winds. Over time, these winds would otherwise simply blow the atmosphere away.