Maybe they are the reason global warming has not taken off the way climate researchers estimated it would. Sulfur dioxide gas that eruptions expel might be cooling the atmosphere more than previously thought, contributing to the recent slowdown in global warming, according to a new study.

Droplets of sulfuric acid that form when sulfur dioxide gas combines with oxygen in the upper atmosphere can remain for many months, reflecting sunlight away from Earth and lowering temperatures. Climate scientists had said that relatively minor eruptions -- those in the lower half of a scale used to rate volcano "explosivity"-- do not contribute much to this cooling phenomenon.

But new ground-, air- and satellite measurements show that small volcanic eruptions that occurred between 2000 and 2013 have deflected almost double the amount of solar radiation previously estimated. By knocking incoming solar energy back out into space, sulfuric acid particles from these recent eruptions could be responsible for decreasing global temperatures by 0.09 to 0.22 degrees Fahrenheit since 2000. 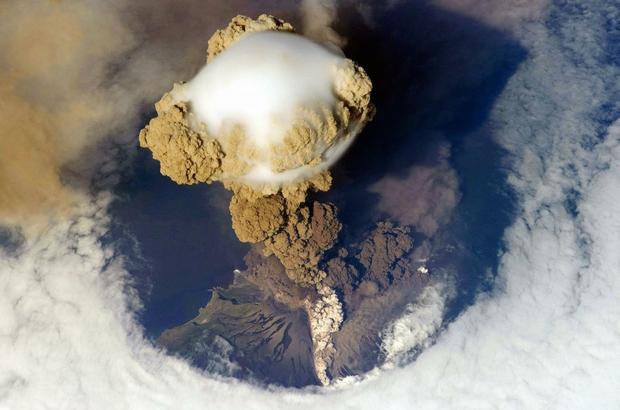 The Sarychev Peak Volcano, on Matua Island, erupted on June 12, 2009. New research shows that eruptions of this size may contribute more to the recent lull in global temperature increases than previously thought. Credit: NASA

These new data could help to explain why increases in global temperatures have slowed over the past 15 years, a period dubbed the 'global warming hiatus,' according to the study's authors.

The warmest year on record is 1998. After that, the steep climb in global temperatures observed over the 20th century appeared to level off. Scientists previously suggested that weak solar activity or heat uptake by the oceans could be responsible for this lull in temperature increases, but only recently have they thought minor volcanic eruptions might be a factor.

Climate projections typically don't include the effect of volcanic eruptions, as these events are nearly impossible to predict, according to Alan Robock, a climatologist at Rutgers University in New Brunswick, N.J., who was not involved in the study. Only large eruptions on the scale of the cataclysmic 1991 Mount Pinatubo eruption in the Philippines, which ejected an estimated 20 million metric tons (44 billion pounds) of sulfur, were thought to impact global climate. But according to David Ridley, an atmospheric scientist at the Massachusetts Institute of Technology in Cambridge and lead author of the new study, classic climate models weren't adding up.

"The prediction of global temperature from the [latest] models indicated continuing strong warming post-2000, when in reality the rate of warming has slowed," said Ridley. That meant to him that a piece of the puzzle was missing, and he found it at the intersection of two atmospheric layers, the stratosphere and the troposphere-- the lowest layer of the atmosphere, where all weather takes place. Those layers meet between 10 and 15 kilometers (six to nine miles) above the Earth.

Traditionally, scientists have used satellites to measure sulfuric acid droplets and other fine, suspended particles, or aerosols, that erupting volcanoes spew into the stratosphere. But ordinary water-vapor clouds in the troposphere can foil data collection below 15 km, Ridley said. "The satellite data does a great job of monitoring the particles above 15 km, which is fine in the tropics. However, towards the poles we are missing more and more of the particles residing in the lower stratosphere that can reach down to 10 km."

To get around this, the new study combined observations from ground-, air- and space-based instruments to better observe aerosols in the lower portion of the stratosphere.

Four lidar systems measured laser light bouncing off aerosols to estimate the particles' stratospheric concentrations, while a balloon-borne particle counter and satellite datasets provided cross-checks on the lidar measurements. A global network of ground-based sun-photometers, called AERONET, also detected aerosols by measuring the intensity of sunlight reaching the instruments. Together, these observing systems provided a more complete picture of the total amount of aerosols in the stratosphere, according to the study authors.

Including these new observations in a simple climate model, the researchers found that volcanic eruptions reduced the incoming solar power by -0.19 ± 0.09 watts of sunlight per square meter of the Earth's surface during the 'global warming hiatus', enough to lower global surface temperatures by 0.05 to 0.12 degrees Celsius (0.09 to 0.22 degrees Fahrenheit). By contrast, other studies have shown that the 1991 Mount Pinatubo eruption warded off about three to five watts per square meter at its peak, but tapered off to background levels in the years following the eruption. The shading from Pinatubo corresponded to a global temperature drop of 0.5 degrees Celsius (0.9 degrees Fahrenheit).

Robock said the new research provides evidence that there may be more aerosols in the atmosphere than previously thought. "This is part of the story about what has been driving climate change for the past 15 years," he said. "It's the best analysis we've had of the effects of a lot of small volcanic eruptions on climate."

Ridley said he hopes the new data will make their way into climate models and help explain some of the inconsistencies that climate scientists have noted between the models and what is being observed.

Robock cautioned, however, that the ground-based AERONET instruments that the researchers used were developed to measure aerosols in the troposphere, not the stratosphere. To build the best climate models, he said, a more robust monitoring system for stratospheric aerosols will need to be developed.