News Staff
There've been some recent environmental claims about methane seepage, flaming tapwater, but what were not staged have been due to nature.  It's a tale almost as old as earth.

But outside environmental circles, science was always thinking about methane as much as CO2, because it has a 23X greater warming impact than CO2. Fortunately it is short-lived so trace seepage of methane from natural gas is nowhere near as devastating as CO2 from other forms of energy creation. Natural gas is why emissions from energy in America are back at early 1990s levels and emissions from coal, the dirtiest polluter, are back at early 1980s levels. Even though it is modest from natural gas, 60 percent of methane in the atmosphere comes from human activities (such as cow burps and other things) but that is nothing compared to the giga-tons of it trapped under the ocean floor of the Arctic.

But fear not, it always has.

"Our planet is leaking methane gas all the time. If you go snorkeling in the Caribbean you can see bubbles raising from the ocean floor at 25 meters depth. We studied this type of release, only in a much deeper, colder and darker environment. And found out that it has been going on, periodically, for as far back as 2.7 million years," says Andreia Plaza Faverola, researcher at Centre for Arctic Gas Hydrate, Environment and Climate, and the primary author behind a new paper in Geophysical Research Letters. 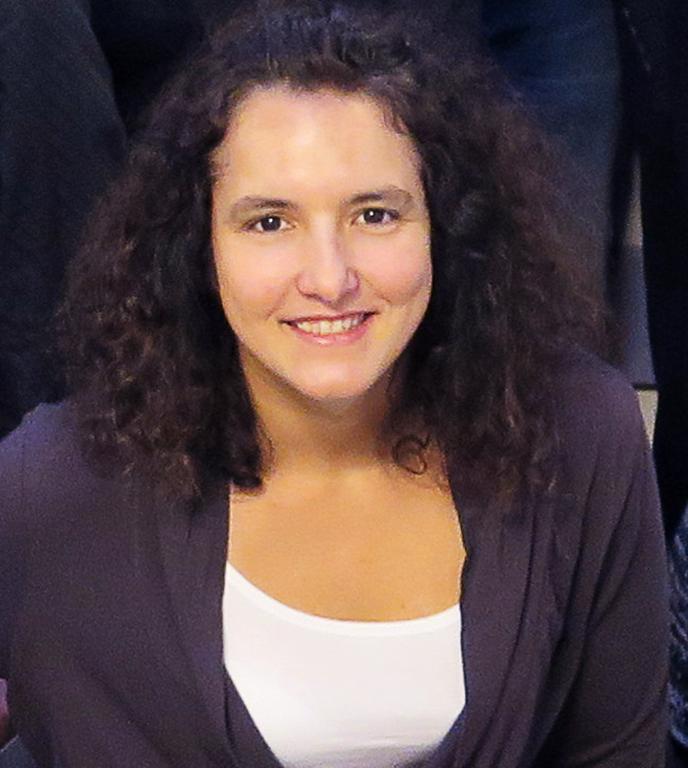 Faverola  is talking about Vestnesa Ridge in Fram Strait, a thousand meters under the Arctic Ocean surface offshore West-Svalbard. Here, 800 meter high gas flares rise from the seabed today. That's the size of the tallest manmade structure in the world - Burj Khalifa in Dubai.

"Half of Vestnesa Ridge is showing very active seepage of methane. The other half is not. But there are obvious pockmarks on the inactive half, cavities and dents in the ocean floor, that we recognized as old seepage features. So we were wondering what activates, or deactivates, the seepage in this area," says Faverola.

The team of marine geophysicists from CAGE used the P-Cable technology to figure it out. It is a seismic instrument that is towed behind a research vessel. It recorded the sediments beneath these pockmarks. P-Cable renders images that look like layers of a cake. It also enables scientists to visualize deep sediments in 3D. 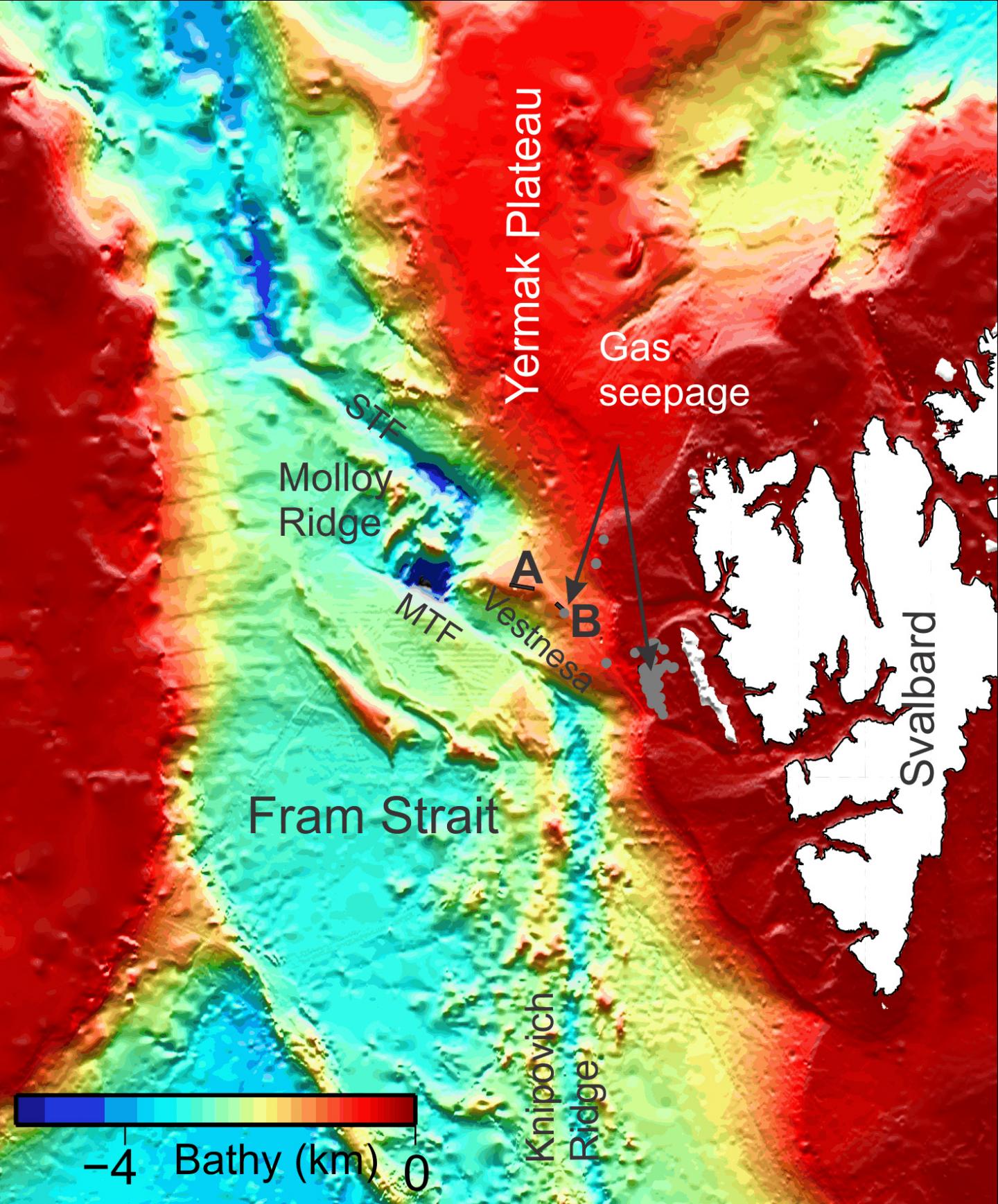 "We know from other studies in the region that the sediments we are looking at in our seismic data are at least 2.7 million years old. This is the period of increase of glaciations in the Northern Hemisphere, which influences the sediment. The P-Cable enabled us to see features in this sediment, associated with gas release in the past.

"These features can be buried pinnacles or cavities that form what we call gas chimneys in the seismic data. Gas chimneys appear like vertical disturbances in the layers of our sedimentary cake. This enables us to reconstruct the evolution of gas expulsion from this area for at least 2,7 million years."

The seismic signal penetrated into 400 to 500 meters of sediment to map this timescale.

How is the methane released?

By using this method, scientists were able to identify two major events of gas emission throughout this time period: One 1,8 million years ago, the other 200,000 years ago.

This means that there is something that activated and deactivated the emissions several times. The authors have a plausible explanation: It is the movement of the tectonic plates that influences the gas release.

Vestnesa is not like California though, riddled with earthquakes because of the moving plates. The ridge is on a so-called passive margin. But as it turns out, it doesn´t take a huge tectonic shift to release the methane stored under the ocean floor.

"Even though Vestnesa Ridge is on a passive margin, it is between two oceanic ridges that are slowly spreading. These spreading ridges resulted in separation of Svalbard from Greenland and opening of the Fram Strait. The spreading influences the passive margin of West-Svalbard, and even small mechanical collapse in the sediment can trigger seepage," says Faverola.

Where does the methane come from?

The methane is stored as gas hydrates, chunks of frozen gas and water, up to hundreds of meters under the ocean floor. Vestnesa hosts a large gas hydrate system. There is some concern that global warming of the oceans may melt this icy gas and release it into the atmosphere. That is not very likely in this area, according to Faverola.

"This is a deep water gas hydrate system, which means that it is in permanently cold waters and under a lot of pressure. This pressure keeps the hydrates stable and the whole system is not vulnerable to global temperature changes. But under the stable hydrates there is gas that is not frozen. The amount of this gas may increase if hydrates melt at the base of this stability zone, or if gas from deeper in the sediments arrives into the system. This could increase the pressure in this part of the system, and the free gas may escape the seafloor through chimneys. Hydrates would still remain stable in this scenario."

Throughout Earth´s history there have been several short periods of significant increase in temperature. And these periods often coincide with peaks of methane in the atmosphere , as recorded by ice cores. Scientists such as Plaza Faverola are still debating about the cause of this methane release in the past.

"One hypotheses is that massive gas release from geological sources, such as volcanos or ocean sediments may have influenced global climate.. What we know is that there is a lot of methane released at present time from the ocean floor. What we need to find out is if it reaches the atmosphere, or if it ever did."

Historical events of methane release, such as the ones in the Vestnesa Ridge, provide crucial information that can be used in future climate modeling. Knowing if these events repeat, and identifying what makes them happen, may help us to better predict the potential influence of methane from the oceans on future climate.