News Staff
Methane is a greenhouse gas with more warming impact than carbon dioxide but also fortunately a much shorter life in the atmosphere.

Due to the popularity of much cleaner natural gas, which has caused CO2 emissions to drop, there are concerns about methane but the big source is nature herself - decomposition of organic material, a complex process involving bacteria and microbes, is a big culprit.

Abiotic methane, formed by chemical reactions in the oceanic crust beneath the seafloor, is trapped by deep water gas hydrates, icy substances in the sediments, and one such reservoir was recently discovered on the ultraslow spreading Knipovich ridge, in the deep Fram Strait of the Arctic Ocean. The study suggests that abiotic methane could supply vast systems of methane hydrate throughout the Arctic.

It occurs through a process called serpentinization. 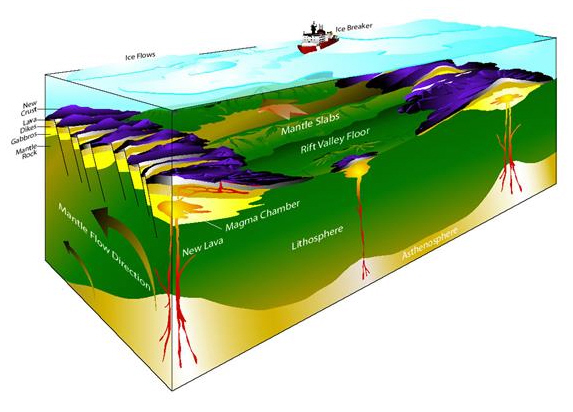 Ultra-slow spreading ocean ridges were discovered in the Arctic in 2003 by scientists at Woods Hole Ocenographic Institution. They found that for large regions the sea floor splits apart by pulling up solid rock from deep within the earth. These rocks, known as peridotites (after the gemstone peridot) come from the deep layer of the earth known as the mantle. Illustration: Dr. Henry J.B. Dick, WHOI/nsf.gov

“Serpentinization occurs when seawater reacts with hot mantle rocks exhumed along large faults within the seafloor. These only form in slow to ultraslow spreading seafloor crust. The optimal temperature range for serpentinization of ocean crust is 200 – 350 degrees Celsius.” says Joel Johnson associate professor at the University of New Hampshire and lead author of the study. Methane produced by serpentinization can escape through cracks and faults, and end up at the ocean floor. But in the Knipovich Ridge it is trapped as gas hydrate in the sediments. How is it possible that relatively warm gas becomes this icy substance?

“In other known settings the abiotic methane escapes into the ocean, where it potentially influences ocean chemistry. But if the pressure is high enough, and the subseafloor temperature is cold enough, the gas gets trapped in a hydrate structure below the sea floor. This is the case at Knipovich Ridge, where sediments cap the ocean crust at water depths up to 2000 meters. “ says Johnson.

Another peculiarity about this ridge is that because it is so slowly spreading, it is covered in sediments deposited by fast moving ocean currents of the Fram Strait. The sediments contain the hydrate reservoir, and have been doing so for about 2 million years.