A new study has created a cause-and-effect link between chronic high blood sugar and disruption of mitochondria, the energy factories that create the metabolic energy that power most of our cells.

Previous experiments by other research groups had shown that the high blood sugar of untreated diabetes alters the activity of mitochondria, compartments that process nutrients into useable energy for cells. To find out why, postdoctoral fellow Dr. Partha Banerjee compared the enzymes in mitochondria from the hearts of rats with diabetes to those from healthy rat hearts. He looked for differences in levels of two enzymes that add and remove a molecule called O-GlcNAc to proteins.

Banerjee found that levels of one enzyme, O-GlcNAc transferase, that adds O-GlcNAc to proteins was higher in the diabetic rat mitochondria, while levels of an enzyme that removes O-GlcNAc, O-GlcNAcase, were down. 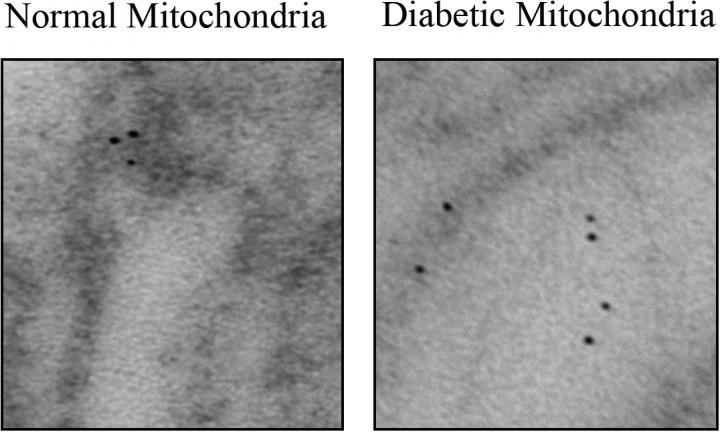 An electron microscope image shows dark-stained O-GlcNAc transferase localized to one complex in the mitochondrial membrane, left, and scattered to the inside of the mitochondria, right. Credit: Partha Banerjee/Johns Hopkins Medicine

No, sugar is not toxic

"Sugar itself isn't toxic, so it's been a mystery why high blood sugar can have such a profound effect on the body," says Gerald Hart, Ph.D. , director of the Johns Hopkins University School of Medicine's Department of Biological Chemistry. "The answer seems to be that high blood sugar disrupts the activity of a molecule that is involved in numerous processes within the cell."

The net effect of the changes in O-GlcNAc-related activity, Hart says, is to make energy production in the mitochondria less efficient so that the mitochondria begin to produce more heat and damaging molecules as byproducts of the process. The liver then kicks off an antioxidant process for neutralizing so-called free radicals, which involves making more glucose, increasing blood sugar further.

Finding a medication that normalizes activity of the O-GlcNAc enzymes, he says, could be an effective way to prevent or treat diabetes.

Citation: Partha S. Banerjee, Junfeng Ma, and Gerald W. Hart , Diabetes-associated dysregulation of O-GlcNAcylation in rat cardiac mitochondria, PNAS April 27, 2015, doi:10.1073/pnas.1424017112.  Hart receives a share of royalty received by the university on sales of the CTD 110.6 antibody, which are managed by The Johns Hopkins University. CTD 110.6 antibody was used in the experiments described here.