News Staff
In the search for enzymes that can break lignocellulose down into biofuel sugars under the extreme conditions of a refinery, researchers are investigating new ways to release plant sugars from lignin for the production of liquid transportation fuels. Sugars can be fermented into fuels once the woody matter comprised of cellulose, hemicellulose, and lignin is broken down, but lignocellulose is tough.

For various chemical reasons, all of which add up to cost-competitiveness, biorefineries could benefit if the production of biofuels from lignocellulosic biomass is carried out at temperatures between 65 and 70 degrees Celsius.

Recent research for cellulases that can tolerate these and even harsher conditions led them to thermal springs near Gerlach, Nevada, where the water temperature can be close to boiling. There scientists discovered a consortium of three hyperthermophilic Archaea that could grow on crystalline cellulose at 90 degrees Celsius. 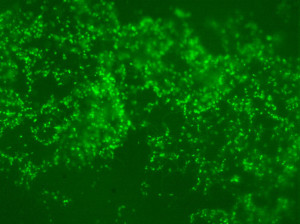 “Lignocellulose is designed by nature to stand tall and resist being broken down, and lignin in particular acts like a molecular glue to help hold it together,” said Douglas Clark at the San Francisco American Chemical Society meeting. Clark holds appointments with Berkeley Lab’s Physical Biosciences Division and UC Berkeley’s Chemical and Biomolecular Engineering Department. “Consequently, lignocellulosic biomass must undergo either chemical or enzymatic deconstruction to release the sugars that can be fermented to biofuels. This consortium represents the first instance of Archaea able to deconstruct lignocellulose optimally above 90°C.”

Following metagenomic studies on the consortium, the most active high-temperature cellulase was identified and named EBI-244.

“The EBI-244 cellulase is active at temperatures as high as 108 degrees Celsius, the most extremely heat-tolerant enzyme ever found in any cellulose-digesting microbe,” Clark said.

The most recent expedition of Clark and his colleagues was to thermal hot springs in Lassen Volcanic National Park, where they found an enzyme active on cellulose up to 100°C under highly acidic conditions – pH approximately 2.2.

“The Lassen enzyme is the most acidothermophilic cellulase yet discovered,” Clark said. “The final products that it forms are similar to those produced by EBI244.”

In addition to bioprospecting for heat tolerant enzymes, Clark and his colleagues have developed a simple and effective mutagenesis method to enhance the properties of natural enzymes. Most recently they used this technique to increase the optimal temperature and enhance the thermostability of Ce17A, a fungal cellulase that is present in high concentrations in commercial cellulase cocktails. They engineered yeast to produce this enzyme with encouraging results.

“The yeast Saccharomyces cerevisiae has often been used both in the engineering and basic study of Cel7A; however, Cel7A enzymes recombinantly expressed in yeast are often less active and less stable than their native counterparts,” Clark said. “We discovered that an important post-translational modification that was sometimes absent in the yeast-expressed enzyme was the underlying cause of this disparity and successfully carried out the post-translational modification in vitro. After this treatment, the properties of Cel7A recombinantly expressed in yeast were improved to match those of the native enzyme.”

Collaborators in this research include Harvey Blanch, who also holds joint appointments with Berkeley Lab and UC Berkeley, and Frank Robb from the University of Maryland.