A pair of neurons that cause males to remember and seek sex even at the expense of food. These neurons, which are male-specific, are required for sex-based differences in learning, suggesting that sex differences in cognitive abilities can be genetically hardwired.

The study by UCL (UK) and Albert Einstein College of Medicine (USA), published today in Nature and funded by the Wellcome Trust, NIH, Marie Curie, and the G. Harold&Leila Y. Mathers Charitable Foundation, shows a direct link between contrasting behavior of male and female worms and differences in brain development and structure in areas involved in higher order processing. 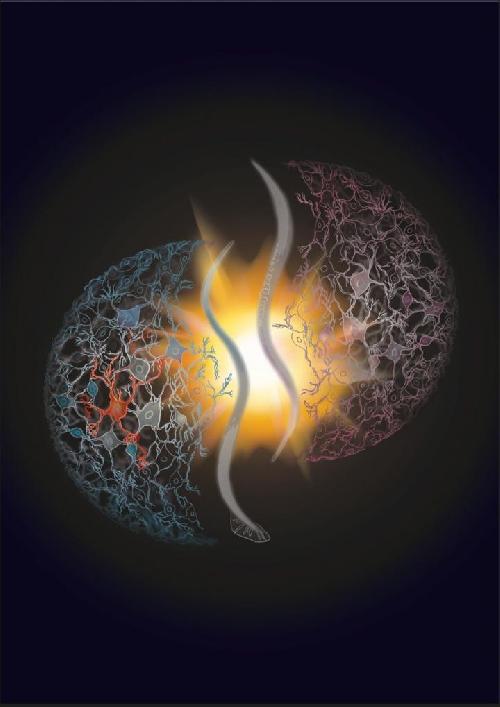 Senior author Dr Arantza Barrios, UCL Cell & Developmental Biology, said: "Areas of the brain involved in learning display sex differences in many animals, including humans, but how these differences directly affect behaviour is not clear.

The team were surprised to find previously unidentified cells are responsible for the behavioural change, as worms are an extremely well studied model organism. They were able to show that the cells from which these male brain neurons are born share common characteristics to the cells that give rise to human brain neurons. They are glial cells - companion and support cells of neurons.

Co-senior author Dr Richard Poole, UCL Cell & Developmental Biology, said: "This is the first well-described example of glia making neurons outside vertebrates and is particularly exciting as we find that the glial cells in question are fully differentiated cells, an issue that has been tricky to address in higher organisms.

"We can now exploit this system to understand how fully differentiated glia can re-enter the cell cycle and generate neurons. This could have important therapeutic implications in the future".

The newly identified pair of neurons - called 'mystery cells of the male' or 'MCMs' - create behavioural differences between the sexes by changing a brain circuit common to both. Whether the neurons are born or not depends on the genetic sex of the glial cells from which they arise and not on the sex of the animal or on hormones. The MCM neurons are only made from glial cells that have male chromosomes.

Dr Barrios added: "Our findings suggest that differences in learning and perception depend not just on the sex of the animal but also on the sex of the individual neural progenitor cells. This means that different aspects of an animal's behavior may well develop independently of each other in some circumstances, instead of through the co-ordinated action of hormones. Of course not all behavioural differences are genetically hardwired, environment can also play an important role."

The worm species used in the study, Caenorhabditis elegans, has two sexes: males and hermaphrodites. These hermaphrodites are essentially modified females that carry their own sperm and do not need to have sex in order to reproduce. The MCMs were identified using fluorescently tagged markers and their function could be probed by surgically removing them using a laser microbeam.

The effect of the cells on the worms' behaviour was tested using classic conditioning behavioural assays in which worms learn to associate aversive or pleasant experiences (such as starvation or mates) with another stimulus (salt) and change their behavioural responses to that stimulus. Worms that were previously starved in the presence of salt, learned to move away from areas with high concentrations of salt when placed in a new environment that had various different salt concentrations. This indicated that worms had learned to perceive salt as a sign for the absence of food.

Both males and hermaphrodites perform this type of learning. In contrast, when males were starved in the presence of salt and mates (i.e. sexual partners), and then placed in a new environment that had different salt concentrations, males sought areas of high concentrations of salt. This indicated that the association of salt with sex was stronger than and preferred over the association of salt with lack of food. This change in behaviour does not occur in hermaphrodites. Importantly, it also does not occur in males whose MCM neurons were surgically removed - demonstrating that these neurons are required for sex-based differences in learning.

The team at Albert Einstein College of Medicine used electron micrographs of serial sections to reconstruct and analyse the connections made by the MCMs with other neurons in the male brain. They found that the MCMs connected with neurons that are present in both sexes and that the presence of MCMs only in males remodeled these circuits to change the way information is processed.

Co-author Professor Scott Emmons, from the Departments of Genetics and Neuroscience at Albert Einstein College of Medicine, said: "Only in C. elegans, at the moment, is it possible to identify every synapse in a neural circuit in the way we have done here. Though the work is carried out in a small worm, it nevertheless gives us a perspective that helps us appreciate and possibly understand the variety of human sexuality, sexual orientation, and gender identification."

The scientists hope to discover how glial cells make neurons, as it is a promising avenue for repairing damaged areas of the brain. They also want to determine what specific properties of brain circuits regulate the acquisition and retention of information in order to understand how learning occurs.