A few years ago, Europe had a policy making it illegal to sell fruit that was not cosmetically ideal. People overpaying for food deserve to have it aesthetically pleasing as well, was the reasoning, and having someone buy ugly fruit was a sign of inequality.

That policy was changed but for people who want to pay to have ideal fruit, there are still ways:  recently have demonstrated a laser biospeckle technique capable of detecting fruits' "climacteric peak" so it will always be harvested at just the right time. That means apples, bananas, pears and tomatoes could be available to well-heeled consumers during "peak edibleness."

By tapping biospeckle activity, generated by illuminating a biological medium with coherent light, the researchers studied the evolution of two batches of Golden apples' speckle patterns as they underwent the ripening process in both low- and room-temperature environments. 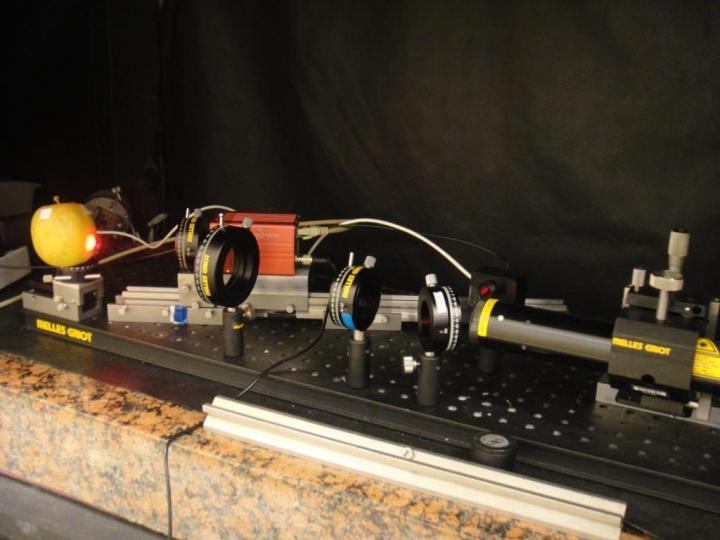 What's the significance of this climacteric peak? "Fruits are divided into two categories: climacteric or nonclimacteric fruits," explained Rana Nassif, a postdoctoral researcher affiliated with both Saint Joseph University and the Université de Bretagne Occidentale de Brest. "Climacteric fruits continue their maturation off the tree or vine, so these fruits emit ethylene and are characterized by a climacteric peak--indicating a maximum ethylene release.

"This peak signals that the fruit has reached its maturity." After this point, the fruit is more susceptible to fungal invasion or begins to degrade from cell death.

To achieve the result, the team used a setup that involves coherent light, a laser beam, polarizers and quarter-wave plates to generate different incident polarizations, and a digital camera to record the speckle pattern. "Simplicity and low cost are the key advantages of our technique," noted Nassif.

How does it work? Laser light interacts with any medium through different processes such as scattering, absorption and reflection. Photons scattered by the medium interfere with the incident light field to create a speckle pattern. "A group of sparkling and dark grains called 'speckle grains' make up this pattern. If the medium is biological -- meaning that it presents some sort of cell activity -- its speckle pattern will show changes with time," she said. "And this pattern depends on the medium's scattering properties, as well as its own nature."

Once obtained, speckle patterns can be correlated with a reference standard, which is based on emitted ethylene concentrations obtained by a principal component analysis. "This approach allows us to validate biospeckle as a noninvasive alternative method to respiration rate and ethylene production, which are used today for climacteric peak detection and as a ripening index," said Nassif.

The team explored the diffusion properties and inner activity aspects of the apples via speckle grain size, recording the temporal correlation between a set of images, consecutively, in different light polarizations. "On one hand, the changes the speckle grain size underwent marked an inflection point corresponding to the climacteric peak for apples stored at room temperature. While on the other hand, the time correlation coefficient behavior demonstrated a rise in the apples' activity until the day of climacteric peak was reached, followed by a decrease that marked the beginning of the deterioration stage."

Beyond apples, Nassif and colleagues are also monitoring the ripening of "Conference" pears -- performing backscattered speckle images on the fruits during the ripening phase. They supplemented these images with fluorescence and biochemical measurements.

"By doing this, we were able to show that as the glucose content increases, the circular degree of polarization decreases," Nassif said. In technical terms, she added, "This signature is expected for a medium that constituted a significant portion of small 'scatterers,' in which the Rayleigh diffusion regime outweighs the Mie regime. We also noticed a decreasing speckle grain size, which can be attributed either to increasing glucose or the decreasing of absorption."

What's next for the team? "In the near term, we're working on speckle theoretical studies based on Monte Carlo simulations -- taking into account light polarization and media characteristics," said Nassif. "These simulations can be used to differentiate and quantify the diffusion coefficient variations and its effect from those of absorption on the fruits' speckle image." This is the speckle pattern recorded when illuminating an apple. Credit: R. Nassif

Then, they'll focus on comparing these simulations with experiments done on latex spheres -- a mix of spheres of varying diameters -- to vary the diffusion and absorption coefficient.

And, of course, one of the team's ultimate goals is to develop a portable tool to enable farmers to noninvasively assess their fruits' maturity in orchards or fields to detect the optimal time to harvest their crops. "This is of great interest to fruit farmers--especially since most tests used today are either destructive or based on visual criteria that are often wrong," noted Nassif.