News Staff
A long noncoding RNA (lncRNA), which might give an impact on tyrosine kinase-targeted leukemia therapy, was found to be expressed in a leukemia cell line.

The function of the lncRNA CCDC26 is not fully understood; however, researchers found the mechanisms by which CCDC26 controls the receptor tyrosine kinase KIT expression. Recent transcriptomic studies have revealed the existence of numerous RNAs that are relatively long but not translated into proteins. Some of such lncRNAs are suggested to regulate the expression of other genes. Mutations or imbalances in the noncoding RNA repertoire within the body can therefore cause a variety of diseases such as cancer. However, the molecular functions of lncRNAs remain to be fully elucidated. 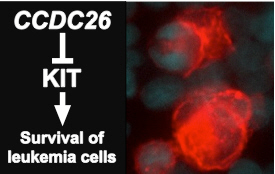 Dr. Tetsuo Hirano from the Graduate School of Integrated Arts and Science at Hiroshima University found that knockdown of the CCDC26 gene in cells results in significant upregulation of the KIT gene, hyperactive mutations of which are often found in acute myeloid leukemia.

Dr. Hirano and his collaborators at the School of Medicine in Juntendo University showed that CCDC26 transcript levels are high in the nuclear fraction of human myeloid leukemia cell lines. They also found that CCDC26 knockdown induces suppression of CCDC26 intron-containing transcripts, indicating transcriptional gene suppression. Leukemia cells in which CCDC26 was knocked down showed enhanced survival periods after serum withdrawal. A KIT-specific inhibitor reversed this increased survival of the cells. These results are published in a Molecular Cancer article titled, “Long noncoding RNA, CCDC26, controls myeloid leukemia cell growth through regulation of KIT expression.”

“We suggested that CCDC26 controls growth of myeloid leukemia cells through regulation of KIT expression. Abnormal CCDC26 RNA structure could modulate the regulation of KIT to induce undesired overexpression. Leukemia characterized by a mutated copy number of CCDC26 might be treated by KIT-targeted therapy”, says Hirano.