Policy makers and amateur psychology pundits think "necessity is the mother of invention" - and sometimes it is, that is why that became a saying, but plain old opportunity matters a lot. Natural gas had been around for 70 years, for example, and the United States has plenty of coal, but hydraulic fracturing, a modern form of extraction, has made natural gas cheaper and led to reduced greenhouse gas emissions, a competitive advantage and a 'win' for the environment - it was developed due to opportunity, not necessity.

Compare that to the heavy plow, which led to unreal levels of environmental destruction while making Europe a world power and feeding a continental population boom. It was not created due to opportunity, it was necessity - the Bubonic Plague killed off the bulk of the poor working population.

A new anthropology paper finds that we are not the only species often motivated by opportunity even when there is no necessity. Writing in Biology Letters,  Dr. Kathelijne Koops of the University of Cambridge and colleagues argue that orangutan also think in terms of capitalism - opportunity rather than necessity is the main driver behind
chimpanzees, orangutans and bearded capuchins
picking up a stone to crack open nuts.

So we don't need to make gasoline $6 a gallon for solar energy to become viable, if the opportunity is there, capitalism will make it happen, just like with fracking. 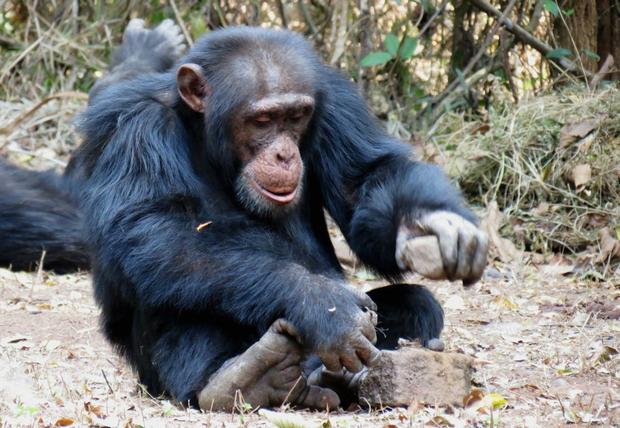 Chimpanzees didn't need a rock to crack open a nut but they found a way to optimize their nut cracking. Credit: Kathelijine Koops

The researchers' review of the published literature, including their own studies, revealed that, against expectations, tool use did not increase in times when food was scarce. Instead, tool use appears to be determined by ecological opportunity - with calorie-rich but hard-to-reach foodstuffs appearing to act as an incentive for an ingenious use of materials.

"By ecological opportunity, we mean the likelihood of encountering tool materials and resources whose exploitation requires the use of tools. We showed that these ecological opportunities influence the occurrence of tool use. The resources extracted using tools, such as nuts and honey, are among the richest in primate habitats. Hence, extraction pays off, and not just during times of food scarcity," said Koops.

Tool use - and transmission of tool-making and tool-using skills between individuals - is seen as an important marker in the development of culture. "Given our close genetic links to our primate cousins, their tool use may provide valuable insights into how humans developed their extraordinary material culture and technology," said Koops.

It has been argued that culture is present among wild primates because simple ecological and genetic differences alone cannot account for the variation of behavior - such as tool use - observed across populations of the same species.

Koops and co-researchers argue that this 'method of exclusion' may present a misleading picture when applied to the material aspects of culture.

"The local environment may exert a powerful influence on culture and may, in fact, be critical for understanding the occurrence and distribution of material culture. In forests with plenty of nut trees, we are more likely to find chimpanzees cracking nuts, which is the textbook example of chimpanzee material culture," said Koops.

"Our study suggests that published research on primate cultures, which depend on the 'method of exclusion', may well underestimate the cultural repertoires of primates in the wild, perhaps by a wide margin. We propose a model in which the environment is explicitly recognised as a possible influence on material culture."