News Staff
Gorilla teeth are large and high crested when compared to other great apes, believed to an adaptation to them spending a large amount of time chewing tough fibrous plant material - they have a vegetarian diet consisting almost exclusively of leafy vegetation and fruit.

The high crests on their molar teeth are at risk of damage if they eat hard objects, such as nuts encased in a woody shell, but they do it anyway. And an anthropology paper seems surprised a primate might engage in behavior that is not a force of evolution.

Coula edulis nuts are available a few months each year in Loango National Park but because they are encased in a hard, woody shell that takes nearly 300 kg of force to crack, it was surprising to anthropologists that during its availability they concentrate their feeding on the energy rich kernels, spending up to three hours a day chomping through nuts. 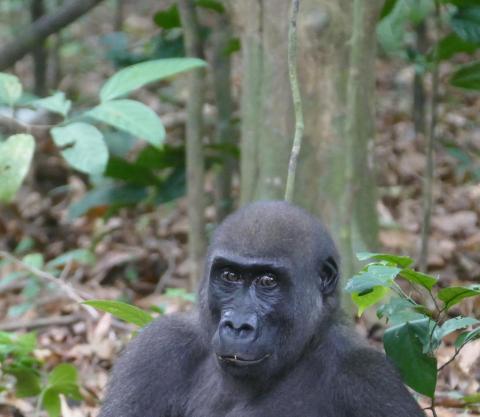 It's not a surprise to non-anthropology primates, it is expected that when a rare food is only available for a short time, primates will do some extra work to get it. Some even use tools. Yet the senior author writes, "Gorillas obviously have large, powerful jaws, but we did not expect to see this because their teeth are not well-suited to such behavior."

It could also be that the teeth are stronger than believed, or primates engage in risky behavior for pleasure, even if they lack the strong, rounded molars that act like a pestle and mortar and are better at cracking brittle foods. It could just be cultural. No one would ever think of smoking a cigarette unless they saw someone else do it, and since human anthropologists have not seen this in other parts of Africa they may believe it is learned behavior in the Park. One gorilla did it, gave it to others and showed them that with enough persistence, and tolerance for risk, they could have it also, and it took off.

What does it mean for research in humans? The paper does address that. Speculation is that humans must have focused on a particular diet because of the shape of our teeth but that is clearly not the case in other primates.
News Articles
More Articles All Articles
About