News Staff
Osteopaths have made their way into various aspects of medicine, primarily because they are still willing to be GPs at a time when MDs are running from government bureaucracy and paperwork, but their founding precepts are still vague. And if you want vague treatment, it is best to find vague conditions. There is no more vague condition than pain.

A small pilot study adds to osteopathic manipulation efforts by finding that women who experience postpartum pain are helped by osteopathic manipulative treatment (OMT). Fifty nine women from St. Barnabas Hospital in Bronx, New York received 20-30 minutes of OMT within the first 48 hours of delivery. Mean score for pain using a visual analogue scale (VAS) decreased from 5.0 to 2.9, with 13 patients reporting being pain free after OMT.

It's childbirth, so there is pain involved before, during and after, no one disputes that. But how does putting pressure in places cure it? There is an old joke about how you can 'cure the pain in your toe by breaking your finger' but there is no biological hypothesis for why the number of patients reporting lower back pain decreased by 30 percent, abdominal pain by 17 percent and vaginal pain by 10 percent. What about the people who got more pain? That is just the body working and bringing on some helpful inflammation, they say. Like exercising makes you sore. You can't lose. If you are really winning, you get the successful supplement business of Dr. Joe Mercola. 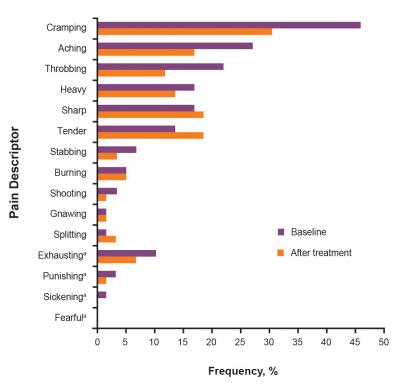 Credit: The Journal of the American Osteopathic Association

Nonetheless, osteopaths claim their techniques can help treat structural and tissue abnormalities, relieve joint restriction and misalignment, restore muscle and tissue balance and promote the overall movement blood flow throughout the body. They even assert it can complement, and in some cases replace, medications or surgery.

They're not as suspect as naturopaths, or crazy, like homeopaths, but the old saying in medicine goes you shouldn't get medical advice from anyone whose title ends in "path."

Published in The Journal of the American Osteopathic Association.
News Articles
More Articles All Articles
About