News Staff
A lot of cultural angst and even more money is tied up in the notion that girls are somehow being left behind and more awareness of the issue, along with programs against sexism, have become common, even at the graduate levels of universities. But the origin of that belief in the last two decades has been a mystery. There are some differences, areas where girls achieved less than boys, and vice-versa. No Child Left Behind was a successful reform of education that led to girls achieving parity with boys in the only area they lagged, mathematics, and a new analysis finds that the concern may have been misplaced all along, individual variance aside.

In 70 percent of the countries studied using international data, regardless of the level of gender, political, economic or social equality, girls outperform boys. Given that, some outreach is needed to boost equality, but we have been doing it for the wrong gender. 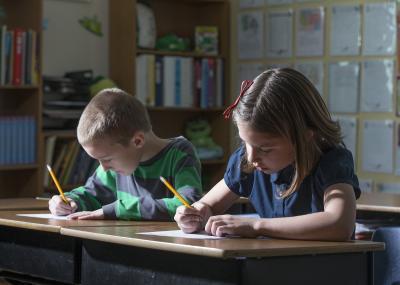 Maybe that 70 percent of teachers are female are why boys are being left behind. Credit: Mark Philbrick/BYU

"We studied the educational achievement levels of 1.5 million 15-year-olds from around the world using data collected between 2000 and 2010," said David Geary, Curators Professor of Psychological Sciences in the College of Arts and Science at the University of Missouri. "Even in countries where women's liberties are severely restricted, we found that girls are outperforming boys in reading, mathematics, and science literacy by age 15, regardless of political, economic, social or gender equality issues and policies found in those countries."

According to the data, boys fall behind girls in overall achievement across reading, mathematics, and science in 70 percent of the countries studied. Boys outperform girls in only three countries or regions: Colombia, Costa Rica and the Indian state, Himachal Pradesh. Boys and girls had similar educational achievements in the United States and United Kingdom.

In countries known for relatively low gender equality ratings, such as Qatar, Jordan and the United Arab Emirates, the educational achievement gap is relatively large and favors girls. The one exception worldwide is among students in economically developed nations where high achieving boys outperform high achieving girls, researchers said.

"With the exception of high-achievers, boys have poorer educational outcomes than girls around the world, independent of social equality indicators," said Gijsbert Stoet, reader in psychology at the University of Glasgow. "Results show that a commitment to gender equality on its own is not enough to close the achievement gaps in global education; the gap is not increasing. Although it is vital that we promote gender equality in schools, we also need to make sure that we're doing more to understand why these gaps, especially among boys, persist and what other policies we can develop to close them."

The study also has important implications for educational policy, the researchers said.

"The data will influence how policymakers think about the options available," said Geary. "For example, to increase levels of equal opportunities in education. We believe that policymakers and educators should not expect that broad progress in social equality will necessarily result in educational equality. In fact, we found that with the exception of high achievers, boys have poorer educational outcomes than girls around the world, independent of social equality indicators. Therefore, in order to effectively close the gaps in achievement, education policymakers should consider factors other than political, economic and social equality, and especially as related to boys' overall achievement and high-achieving girls' interest in mathematics and science."

Article: "Sex differences in academic achievement are not related to political, economic or social equality," Intelligence.
News Articles
More Articles All Articles
About