The mountain pine beetle is killing lodgepole pine and jack pine forests in the Western United States, British Columbia, the Northwest Territories, Alberta and could spread east to the Maritimes.

Yes, beetles are natural, but before you start waving Sierra Club brochures and yelling about scary science, keep in mind that nature is out to kill us all. She is, basically, a real bitch.

Researchers have been investigating pheromones emitted by the pest in North America's lodgepole and jack pine forests and tree chemical compounds that play critical roles in the beetle's pheromone production and attraction in both their established lodgepole pine host and in the newer jack pine host.

The idea is to produce scientific bait.

The research revealed that the beetles emit the same pheromones from both tree species, but found that the females in the jack pine tree emitted more trans-verbenol, a pheromone that initiates the beetle aggregation on host trees. Females lead the first attacks on trees, while sending out pheromone signals for more beetles to join the aggregation. "Without this initial chemical signalling, the beetles couldn't aggregate on the same tree," notes Nadir Erbilgin, Associate Professor and Canada Research Chair in Forest Entomology in the University of Alberta. 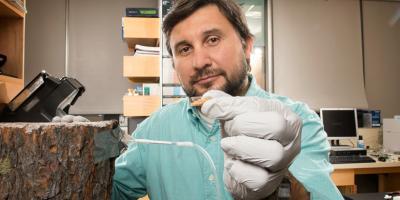 Beetle attacks also induce a release of a volatile tree chemical, 3-carene. Field tests conducted by Erbilgin and his team showed that when 3-carene was added to a mixture mimicking the aggregation pheromone, beetle capture in traps increased.

Understanding the role of pheromones in beetle invasion also allows for quicker monitoring of the insect's activities in jack pine forests, Erbilgin said. "This eliminates the one to two-year gap in diagnosing beetle-killed stands, which don't show up until the dead foliage turns red."

The hope is to have an effective bait developed for use within the next few years.