News Staff
Like many of history's greatest minds, narcissists spend a great deal of time deep in thought - but for narcissists it is thought about themselves.

Neuroscientists recently found a correlation between high scores on the Machiavellian Egocentricity subscale - a measure of narcissism - and activity during rest in the posteromedial cortex, a brain region that previous studies have associated with thoughts about the self.  The study also found a correlation between poor decision-making and brain activity during rest in the medial prefrontal cortex. Impulsive action without regard for consequences is another aspect of psychopathic behavior.

Narcissists thinking about themselves all of the time is more than a stereotype. Since narcissism is one component of the psychopathic mind, differences between the brain patterns of normal people and narcissists may help psychiatrists to understand and treat dangerous individuals. 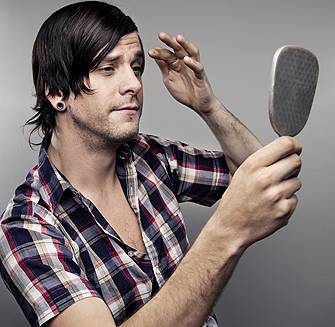 Just a graphic, no actual narcissism was clinically established in this guy.  Credit: USC.

“Perhaps the fact that psychopathy [like personality traits in general] tends to be stable across life might be due to neural mechanisms,” said Tong Sheng, the study’s lead author.

The researchers analyzed brain regions active during rest because they are believed to support a baseline state of thought that includes reflection about the self.   Other studies have linked the posteromedial cortex and medial prefrontal cortex to self-reflective thought.

Activity in the resting state falls off when a person starts a task or reacts to a stimulus, supporting the hypothesis that resting state activity has to do with unstructured recall and reflection.

The study involved 19 healthy volunteers who had their brains scanned by functional magnetic resonance imaging at rest and while performing a task.   Outside the scanner, the subjects took psychological tests to measure narcissism and decision-making.

The researchers wanted to answer a simple question; if these regions are actually important for self-processing, are people who are more narcissistic going to activate these regions even more?

The answer appears to be yes.    The researchers also found a correlation between poor scores on the decision-making test and activity in the medial prefrontal cortex.

The researchers measured the intensity of activity in the resting state by comparing it to activity in the same regions during performance of a task.   Subjects who scored high in narcissism showed a greater drop in activity in the posteromedial cortex when asked to perform a task.

More impulsive subjects showed a similar drop in the medial prefrontal cortex. This makes sense, they explained, since that region seems to be involved in decisions. Subjects who struggle to control their impulses would be expected to show neural deficits in decision-making.   They say the study is the first to show a correlation between narcissism and activity in the posteromedial cortex.