Until the last few decades, the frontal lobes of the brain were shrouded in mystery and erroneously thought of as nonessential for normal function—hence the frequent use of lobotomies in the early 20th century to treat psychiatric disorders. A review in Neuron highlights studies of patients with brain damage that reveal how distinct areas of the frontal lobes are critical for a person's ability to learn, multitask, control their emotions, socialize, and make real-life decisions.

Although fairly common, damage to the prefrontal lobes (also called the prefrontal cortex) is often overlooked and undiagnosed because patients do not manifest obvious deficits. For example, patients with prefrontal brain damage do not lose any of their senses and often have preserved motor and language abilities, but they may manifest social abnormalities or difficulties with high-level planning in everyday life situations.

"In this review, we aimed to highlight a blend of new studies using cutting edge research techniques to investigate brain damage, but also to relate these new studies to original studies, some of which were published more than a century ago," said lead author Dr. Sara Szczepanski, of the University of California, Berkeley. "There is currently a large push to better understand the functions of the prefrontal cortex, and we believe that our review will make an important contribution to this understanding." 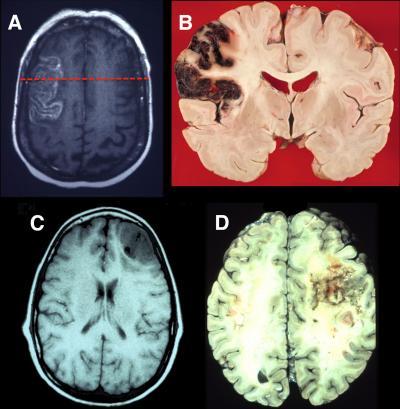 (A) This is an axial T2 magnetic resonance imaging (MRI) image showing an acute stroke in the left lateral prefrontal cortex. (B) This is a coronal neuropathological specimen of an infarct in the left lateral PFC (note the hemorrhagic conversion in the cortical mantle). The red dashed line on the MRI in (A) shows the approximate site of the postmortem coronal slice. (C) This is an axial T1 MRI image showing infiltrating glioblastoma in the right lateral frontal cortex. (D) This is a postmortem axial slice of an infiltrating glioblastoma in the right lateral frontal lobe. Neuropathological specimen in (B) compliments of Professor Dimitri Agamanolis, Akron Children's Hospital. Credit:  Neuron, Szczepanski et al.

In addition to revealing the functions of different areas within the prefrontal cortex, studies have also demonstrated the flexibility of the region, which has helped experts optimize cognitive therapy techniques to enable patients with brain damage to learn new skills and compensate for their impairments.

The review indicates that by studying patients with damage to the prefrontal cortex, investigators can gain insights into this still-mysterious region of the brain that is critical for complex human skills and behavior. (A) This is an axial T1 MRI image of a patient with a chronic left medial frontal lobe lesion due to the resection of a low-grade glioma. (B) This is a coronal neuropathological specimen of an infarct in the left medial PFC (note the hemorrhagic conversion in the cortical mantle). The dashed red line on the MRI in (A) shows the approximate site of the postmortem coronal slice. The image in (A) is compliments of Professor Marianne ovstad, University of Oslo. Neuropathology specimen in (B) is compliments of Professor Dimitri Agamanolis, http://neuropathology-web.org/. Credit:  Neuron, Szczepanski et al.