A research team has produced a detailed working image of an enzyme in the Polycomb Repressive Complex 1 (PRC1) related to the BRCA1 breast-cancer protein. PRC1 regulates cell development and is associated with many types of cancer because enzymes like PRC1 turn on or turn off the activity of genes in a cell by manipulating individual chromosome units called nucleosomes.

The researchers obtained the first crystal structure of a gene-regulation enzyme while it is working on a nucleosome. The image reveals previously unknown information about how the enzyme attaches to its nucleosome target. Before this study, scientists had been unable to picture exactly how cancer-related enzymes in the PRC1 group interacted with a nucleosome to control gene activity. The authors say the study is also the first to determine the crystal structure of a multisubunit protein complex bound to a nucleosome, which itself is a complex assembly of DNA and 4 histone proteins.

The research is the culmination of 12 years of research by the laboratory of Song Tan, professor of biochemistry and molecular biology at Penn State University, to capture an image of this important class of enzymes bound to the nucleosome. His lab earlier had determined the first structure of another nucleosome-bound protein, RCC1. 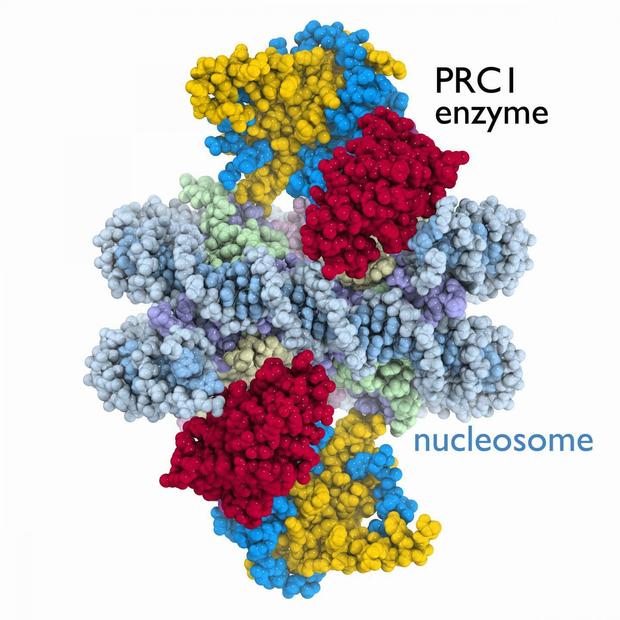 "This is the second important structure from the Tan lab to date of a nucleosome in complex with a protein known to interact with and modify chromatin behavior, which in turn can influence human gene expression," said Peter Preusch, Ph.D., of the National Institutes of Health's National Institute of General Medical Sciences, which partially funded the research. "Along with Dr. Tan's previous work detailing a nucleosome bound to the key regulatory protein, RCC1, this new structure adds to our knowledge of how proteins can regulate the structure and function of our genetic material." Robert K. McGinty and Ryan C. Henrici, an undergraduate student, grew crystals of the PRC1 enzyme bound to the nucleosome. The team then solved the three-dimensional structure of this large molecular assembly by X-ray crystallography. "We are excited about this crystal structure because it provides new paradigms for understanding how chromatin enzymes function," McGinty said.