Television commercials assure us that probiotic products are good for our health, with claims ranging from improved digestion to managing allergies and colds,

If so, why wouldn't plants also benefit from certain microbes?

In plants, beneficial bacteria and fungi are endophytes. Scientists have known for decades that plants like legumes (peas, beans, and lentils) have beneficial bacteria in nodules attached to their roots. These bacteria "fix" vital nitrogen, turning it into a form the plant can easily use. However, researchers have recently found some nitrogen-fixing bacteria actually live inside plant tissue--in the leaves, stems, and roots--with impressive results. Sharon Doty, an associate professor at the University of Washington, was one of the first to discover these bacteria, and their successful transfer between plants. 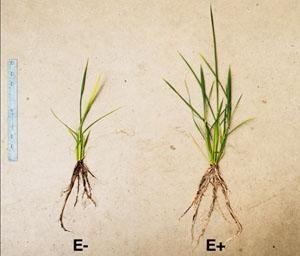 Doty and her team isolated endophytes from poplar and willow trees. These trees thrived despite a rocky, forbidding surround. "All I have to do is look at these trees in their native habitat to see that we are clearly on the right path; simple nitrogen use efficiency cannot explain the continued biomass accumulation of these amazing trees," Doty says.

Doty then transferred the endophytes to rice plants. The result? Larger and taller plants with fuller root systems--despite limited nitrogen conditions in the greenhouse.

This endophyte-plant relationship is partly a matter of speed in adaptation. "Plants have a limited ability to genetically adapt to rapid environmental changes (heat, drought, toxins, or limited nutrients) and so they may use microbes that do have this capacity to rapidly evolve due to their vastly shorter life cycles," she explained. "By having the right microbes for the conditions, the plants are healthier. That is how it is similar to humans taking probiotics to improve their health."

And the environmental payoff? Thanks to these bacteria fixing nitrogen for the plant, farmers could use less chemical fertilizers to give plants the nitrogen they need. Because runoff from these fertilizers can be harmful to surrounding ecosystems, being able to use less is great news and can even decrease greenhouse gas emissions, added Doty. "This research offers the potential alternative for chemical fertilizers in crop production, thus aiding sustainable agriculture with minimum impacts on the environment."

The endophytes of poplar and willow can also provide growth benefits for such diverse species as corn, rice, ryegrasses, tomato, pepper, squash, Douglas fir, and western red cedar. "This suggests that the plant-microbe communication is ancient," Doty noted.

The way these bacteria get inside the plant and then live there is still being studied. It most likely differs by the type of bacteria, Doty said. Some may transfer through seeds and others through the environment. Once inside a plant, the bacteria can migrate throughout -- unlike those found in root nodules -- and are often found in the spaces between plant cells and in areas that transport water or sugars.

Doty's work is also a study in long-term commitment. "When I began as an assistant professor in 2003, I always had side projects on nitrogen-fixation but it was impossible to get funding to study it since [this idea] goes against the established dogma that symbiotic nitrogen-fixation can only occur in root nodules," she said. "I continue to fight that battle even now, over a dozen years later."

Other researchers may study how the endophytes interact with the soil, but Doty's research centers on the internal interactions. This, in turn, has external results. "Many of the endophytes produce plant hormones that (help them grow more roots), so they are impacting how the plants interact with soil in that way as well," she added. "It is essential to find environmentally sustainable crop production methods that reduce the demand for nitrogen fertilizers in cultivation."

The next steps in this work have practical applications. Doty's lab is collaborating with an agricultural company to take advantage of these bacteria on a large scale. This could include seed coating or spraying.

Doty's research was funded by the United States Department of Agriculture (NIFA grant # 2012-00931) and published in Crop Science.