News Staff
Astrophysicists have obtained precise measurements for an object orbiting a black hole five billion light years away - and the innermost region of a disc of matter in orbital motion around a supermassive black hole tucked inside the quasar known as Einstein’s Cross (Q2237-0305).

This constitutes the most precise set of measurements achieved to date for such a small and distant object, and was made possible thanks to years of monitoring as part of the OGLE and GLITP gravitational microlensing projects, which have had their lenses trained on this quasar for 12 and 9 years, respectively. Typically, astronomers can only detect bright objects that emit a lot of light or large objects that block background light.

Microlensing can be used to detect objects that either emit little light or are too far away to be measured the usual way. It measures how much the light emitted bends around other objects lying directly in the path between it and us, with the foreground object acting as a lens and magnifying our view of very distant objects, like quasars and regions within them. 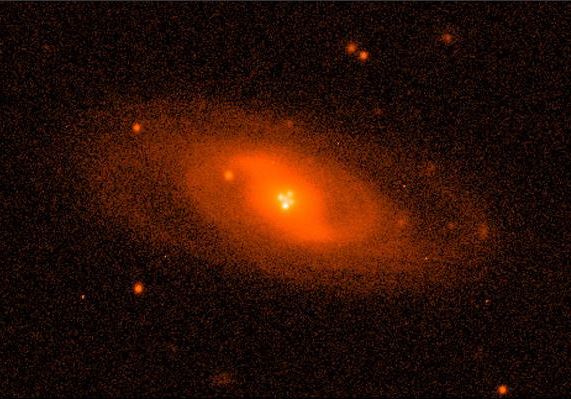 Quasars are very small, very distant objects that emit vast amounts of light. Their energy comes from mass falling onto the accretion disc, a disc of matter spinning extremely fast around a massive central body; in the case of quasars, around a supermassive black hole. Q2237-0305’s accretion disc is comparable to the size of our solar system, but it is so far away that it has only been possible to measure its structure via microlensing.

By studying the variation in brightness of the four different images of the disc provided by OGLE and GLITP, researchers have been able to obtain precise measurements of the structure of its innermost region, right at the edge of the black hole (also known as the event horizon).

José Antonio Muñoz, lecturer at the Department of Astronomy and Astrophysics at the Universitat de València, who took part in this research alongside colleagues at the universities of Granada, Cadiz and the Canary Islands Astrophysics Institute, explains: “In recent years we have shown how microlensing allows us to analyze the structure of quasar accretion discs. Now we have obtained precise measurements of the innermost region of one, likely its innermost stable orbit closest to the black hole at its center.”

Only one in every 500 quasars can be measured in this way. The information obtained will be of enormous use for researchers to gain a deeper understanding of quasars, key to the formation and evolution of galaxies.