News Staff
Mus musculus, the common mouse, can happily live wherever there are humans. When populations of humans migrate the mice often travel with them and apparently that has long been the case. New research used evolutionary techniques on modern day and ancestral mouse mitochondrial DNA to show that the timeline of mouse colonization even matches that of the Viking invasions.

During the Viking age (late 8th to mid 10th century) Vikings from Norway established colonies across Scotland, the Scottish islands, Ireland, and Isle of Man. They also explored the north Atlantic, settling in the Faroe Islands, Iceland, Newfoundland and Greenland. They intentionally brought horses, sheep, goats and chickens but also unknowingly carried pest species, including mice.

A multinational team of researchers used genetic similarity, the relatedness of one population or one individual with another, to determine a mouse colonization timeline. Modern samples of mouse DNA were collected and compared to ancient samples dating mostly from the 10th to the 12th century. Samples of house mouse DNA were collected from nine sites in Iceland, Narsaq in Greenland, and four sites near the Viking archaeological site, L'Anse aux Meadows, in Newfoundland. The ancient samples came from the Eastern and Western settlements in Greenland and four archaeological sites in Iceland. 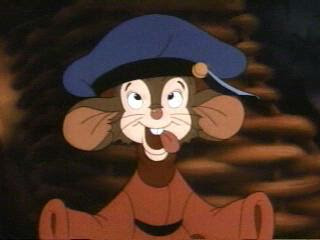 Fievel from American Tail.  Forget your Teutonic predispositions.  Maybe they came over with Vikings first?

Analysis of mouse mitochondrial DNA showed that house mice (M. m. domesticus) went with the Vikings in the early 10th century into Iceland, either from Norway or the northern part of the British Isles. From Iceland the mice continued their journey on Viking ships to settlements in Greenland. However, while descendants of these stowaways can still be found in Iceland, the early colonizers in Greenland have become extinct and their role has been filled by interloping Danish mice (M. m. musculus) brought by a second wave of European human immigrants.

Dr Eleanor Jones explained, "Human settlement history over the last 1000 years is reflected in the genetic sequence of mouse mitochondrial DNA. We can match the pattern of human populations to that of the house mice."

Prof Jeremy Searle, from Cornell University, said, "Absence of traces of ancestral DNA in modern mice can be just as important. We found no evidence of house mice from the Viking period in Newfoundland. If mice did arrive in Newfoundland, then like the Vikings, their presence was fleeting and we found no genetic evidence of it."

Any Viking mice in the USA?  If so, that would settle the Christopher Columbus business once and for all.