There is a downside to 'follow the money' arguments made by academics against scientists in pharmaceutical and oil companies - it comes back to haunt them also.

A paper in PNAS finds that Americans seem wary of researchers because they get grant funding and do not trust scientists pushing political and cultural agendas. The public prefers at least the pretense of impartiality from scientists who are paid by taxpayers. And it wouldn't hurt if scientists came off less angry and a little "warmer" when they engage in outreach, according to a new review published by Princeton University's Woodrow Wilson School of Public and International Affairs in the Proceedings of the National Academy of Sciences (PNAS).

This is a dramatic switch from 2010, when the public still praised scientists. But since that time, science has clearly been lumped in with policy. Adding to skepticism about global warming and stem cells, much of the public also does not trust the impartiality of research when it comes to vaccines, energy and food. 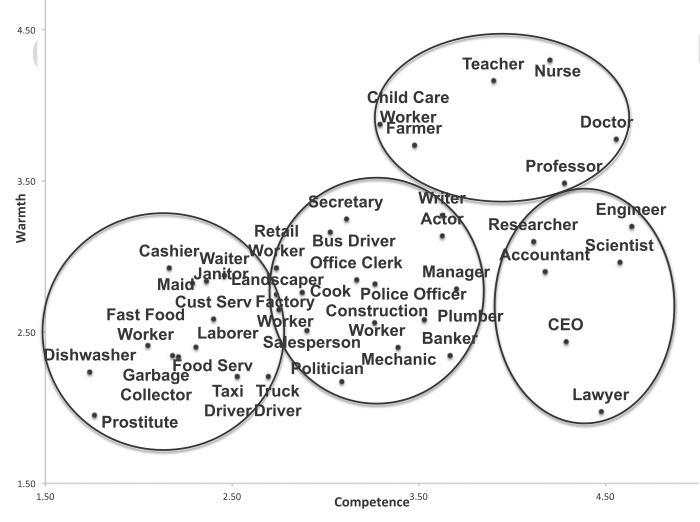 American adults completed an online survey rating common jobs on their public images of being warm and trustworthy as well as competent and capable. The graph above displays how standard professions are perceived by Americans. Credit: Susan Fiske, Princeton University, Woodrow Wilson School of Public and International Affairs

"Scientists have earned the respect of Americans but not necessarily their trust," said lead author Susan Fiske, the Eugene Higgins Professor of Psychology and professor of public affairs. "But this gap can be filled by showing concern for humanity and the environment. Rather than persuading, scientists may better serve citizens by discussing, teaching and sharing information to convey trustworthy intentions."

Fiske has long studied the psychology behind individual intent and motivation. Her research demonstrates that, while expertise is an essential ingredient for credibility, appearing trustworthy is equally as important. Humans are hardwired to detect intent, quickly determining who is friend or foe. And they trust others that seem like themselves, deeming them as warm and trustworthy. Eventually, a person will decide whether the other individual is competent enough to act on their intentions.

Fiske has applied her work to a number of datasets, evaluating professions across a wide spectrum. Into four clusters, she and Dupree have broken down the perceptions Americans have regarding typical jobs in the United States. These perceptions differ on being warm and trustworthy, as well as competent and capable.

To understand how the public responds to science communicators, Fiske and Cydney Dupree, a Princeton graduate student studying psychology and social policy, tested their ideas in two phases. First, they asked an online sample of adult volunteers to list typical American jobs. From that, the researchers honed the list to the 42 most commonly mentioned jobs, which included scientists, researchers, professors and teachers.

Fiske and Dupree then polled a new group of adults about these jobs, asking them to rate the professions based on how American society views them regarding warmth and competence. This method was chosen deliberately, as it allowed Fiske and Dupree to get a better sense of people's reports of public images of groups. This also reduces the many biases attached with reporting one's own individual stereotypes.

Professionals that appear to be caring – such as teachers, nurses and doctors – are seen as both warm and competent. They evoke emotions like pride and admiration. On the opposite end of the spectrum are professions such as prostitutes, garbage collectors, and dishwashers, who are seen as having low warmth and low competence. This reportedly brings forth contempt or disgust by most Americans. The remaining two categories involved somewhat mixed emotions. For example, scientists, engineers and lawyers are seen as competent, but they are not seen as warm. This brings forth emotions like envy and distrust among Americans. Other professions, such as writers, police and bus drivers, are relatively neutral in terms of both warmth and competence. And the final quadrant includes groups that are "pitied," like the unemployed, who are perceived to have high warmth but low competence.

"Science communicators arguably need to know about this possible type of response to them," said Fiske. "From this view, scientists may seem not so warm. Their intent is not necessarily trusted and maybe even resented."

Focusing on scientific communication, Fiske and Dupree administered another online survey asking adults to describe public attitudes toward climate scientists specifically to provide a clearer picture of the public's seemingly mixed feelings. The researchers used a seven-scale item of distrust that included motives derived from pilot work on scientists' alleged motives. These included such motives as lying with statistics, complicating a story, showing superiority, gaining research money and pursuing a liberal agenda, among others.

In the end, the results run mixed; climate scientists earn a not-terrible mean of 2.16 on a five-point scale of distrust. Responses varied, with some being more distrustful than others. And, among the aforementioned motives, it appears that gaining research money is the Achilles' heel, scoring high above the midpoint as a risk factor for public distrust.

Overall, Fiske and Dupree's work shows that climate scientists seem to be less suspect than pure scientists and researchers. In particular, scientists whose jobs involve teaching and communicating may seem warmer and more trustworthy, seeming to show worthy intentions.