News Staff
It's that time of year again. The days are shorter and nights are colder and with that comes people blaming bad moods and symptoms of depression on the decreased amount of daylight, saying, “Oh, I have Seasonal Affective Disorder.”

Seasonal Affective Disorder (SAD) is a form of depression associated with late autumn and winter and thought to be caused by a lack of light. It’s estimated to affect up to 10 million Americans, with another 1-2 million Americans suffering from a mild form- making it extremely common, affecting 1 in every 30 people in the U.S. The term Seasonal Affective Disorder for the condition was created in 1985, and it’s more common the farther North that people live; its prevalence is 9.7% in New Hampshire, for example, but only 1.4% in Florida. 60-90% of SAD sufferers are women, though men usually show the most severe symptoms.

There is no diagnostic test for SAD so often people track their history of seasonal depressive episodes to determine if they have it. It has been noticed to run in families, suggesting a genetic component, and researchers believe that SAD affects the brain because of a lack of exposure to light, as well as low vitamin D levels in the blood.

55% of SAD patients report a close association with a severe depressive disorder, while 34% reported a close relative abusing alcohol.

Since there isn’t very much research around SAD, many myths about the disorder are prevalent. For example, many people who believe they’re suffering from SAD may only be experiencing the winter blues, a milder depression that’s usually treatable by being more active. Psychologists have also posited that people experience SAD symptoms because they associate colder weather seasons with a traumatic event or having to limit activity because of the weather.

While true cases of SAD are somewhat rare and the disorder is tough to diagnose, SAD is a serious depressive condition that’s recognized as a mental disorder. However, SAD doesn’t entail suffering from other depressive conditions, such as clinical depression or bipolar disorder. With SAD, you only experience depression seasonally and must have had depressive episodes during the last two consecutive winters.

Another myth is that SAD only occurs in the winter and that its sufferers are sad the entire winter. In fact, a less common variety of SAD occurs in the summer and is associated with episodes of mania and extreme violence; SAD is also a possible cause for the increase in suicides that typically come with the arrival of spring. SAD isn’t limited to winter only, as it typically starts in fall or winter and improves in spring.

Standard symptoms of SAD include fatigue, irritability, trouble concentrating, depression, poor sleep, decreased activity level, overeating and weight gain, and loss of sex drive. To improve symptoms of SAD, daily phototherapy is often prescribed- but it does have temporary side effects, such as headaches, eyestrain, nausea, and insomnia. Doctors might also recommend relocation to a better climate or therapy. 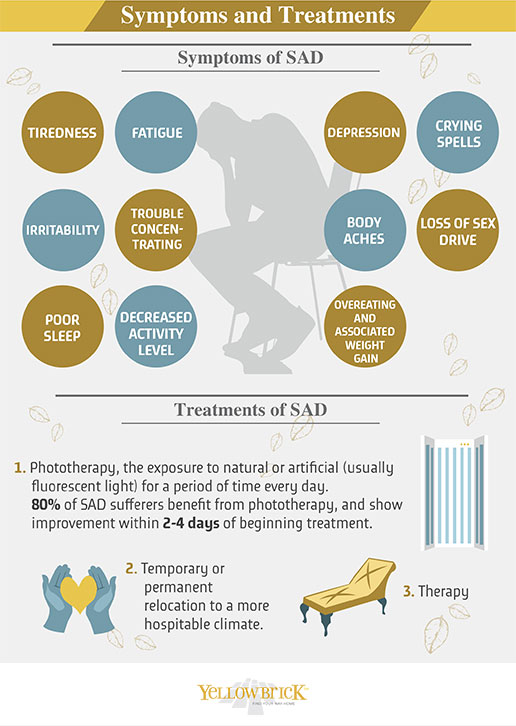 SAD can be a difficult disorder but most often it’s a temporary state and, if not, there is treatment available.