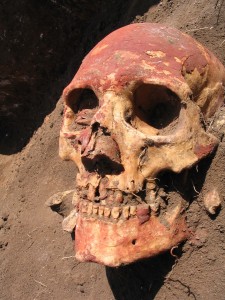 Wide-scale population migrations and changes took place in Europe and Asia during the Bronze Age that shaped the demographic structure of present-day Europeans and Asians, as revealed by an analysis of 101 genomes from ancient Eurasian humans.

A new study published in this week’s Nature presents one of the largest studies of ancient DNA samples to date.  The research provides insights into the prevalence of certain traits such as skin color or lactose tolerance, as well as data relevant to the understanding the spread of Indo-European languages.

The Bronze Age of Eurasia (around 3,000–5,000 years ago) was a time of major cultural changes but it has been debated whether these resulted from the circulation of ideas or because of large-scale migrations. Ancient genomes can provide information on past population histories, but it has been challenging to obtain enough genetic data for detailed analyses.

Eske Willerslev and colleagues overcome this problem using new improved methods to sequence genomes from 101 ancient humans from across Eurasia.

Their analyses indicate that light skin pigmentation was already frequent among Europeans in the Bronze Age. Lactose tolerance, which is high in present-day northern Europeans, was relatively low in Bronze Age Europeans; indicating that the spread of a mutation that allows humans to drink milk was only beginning in the Bronze Age, which is later than previously thought.

The findings also support the theory that migrations during the early Bronze Age had a role in the spread of Indo-European languages.