News Staff
Isotope analysis, ancient pathogen genomics, plus a dash of human population genetics have revealed the deeper connection to date between the early peoples of Siberia and the Americas.

During the Early Bronze Age, people were expanding.

Humans have lived near Lake Baikal in Siberia since the Upper Paleolithic, the last days of the Old Stone Age that ended 12,000 years ago. That means a lot of archaeological history. The transition from the Paleolithic to the Bronze Age happened after the periodic global warming that occurred throughout recent geological history. Increased human mobility meant multiple genetic turnovers and admixture events and a new sequence of 19 ancient human genomes shows the earliest natives in America were first natives of Russia.

That's not really new information, but the 14,000-year-old individual analyzed in this study is the oldest to carry the mixed ancestry present in Native Americans. 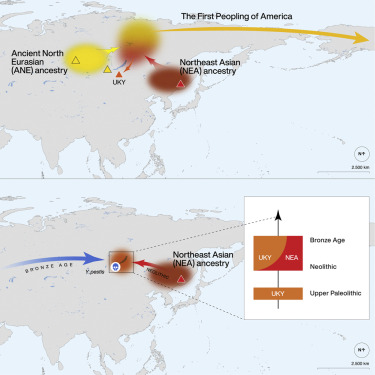 Using an extremely fragmented tooth excavated in 1962 at the Ust-Kyahta-3 site, researchers generated a shotgun-sequenced genome and that, plus a younger Mesolithic one from northeastern Siberia, reveals the same genetic mixture of Ancient North Eurasian (ANE) and Northeast Asian (NEA) ancestry found in Native Americans.

In addition to this transcontinental connection, the study presents connectivity within Eurasia as evidenced in both human and pathogen genomes as well as stable isotope analysis. Combining these lines of evidence, the researchers were able to produce a detailed description of the population history in the Lake Baikal region.

The presence of Eastern European steppe-related ancestry is evidence of contact between southern Siberian and western Eurasian steppe populations in the preamble to the Early Bronze Age, an era characterized by increasing social and technological complexity. The surprising presence of Yersinia pestis, the plague-causing pathogen, points to further wide-ranging contacts.

Although spreading of Y. pestis was postulated to be facilitated by migrations from the steppe, the two individuals here identified with the pathogen were genetically northeastern Asian-like. Isotope analysis of one of the infected individuals revealed a non-local signal, suggesting origins outside the region of discovery.

In addition, the strains of Y. pestis the pair carried is most closely related to a contemporaneous strain identified in an individual from the Baltic region of northeastern Europe, further supporting the high mobility of those Bronze age pathogens and likely also people.
News Articles
More Articles All Articles
About