News Staff
People in Britain, from Scotland to Wales, may maintain a cultural identity, but how much of it is real versus an arbitrary social construct? How much should be decided by genes versus how people choose to identify?

A new study opens up as many questions as it answers about Bronze Age Britain. Where did many of them 'come from'? Inference suggests France.

The work analyzed the DNA from the remains of 793 individuals, directly radiocarbon dating 123 individuals with genome-wide data to between 1300-800 B.C., from the Middle to Late Bronze Age and found large-scale migration into southern Britain from around 1300 to 800 B.C. These newcomers so thoroughly mixed with the native population that by 1000 B.C. they accounted for roughly half the genetic makeup of southern Britain by the Iron Age, which began about 750 B.C. 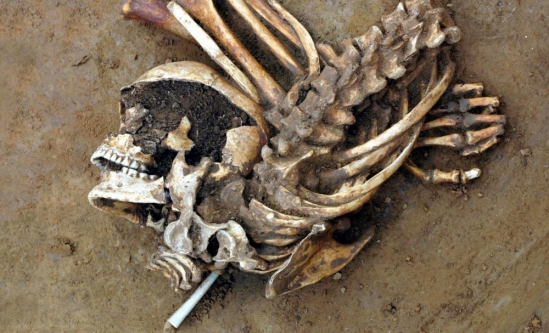 It challenges previous notions of the origins of Celtic languages and culture in Britain but also pushes out Anglo-Saxon heritage farther, unless people pick an arbitrary spot in time. Irish, Welsh and Scottish are all Celtic languages and big population movements often drive cultural changes, including the languages people speak. Did the Bronze Age migrants bring Celtic languages with them? That part remains unclear.

Celtic migration also likely led to Britons’ early love of dairy products. The researchers found lactase persistence in about 50% of the population compared to around 7% in Central Europe. “The allele for lactase persistence does not develop in continental Europe for another millennium,” said co-author Douglas J. Kennett of UC Santa Barbara, “but our study indicates that it developed in Britain earlier, during the Late Bronze age, in concert with the transition in ancestry. This suggests that cultural changes in the consumption of milk products during this transition resulted in genetic changes in the British population favoring milk consumption.”

By eliminating arbitrary social divisions, which only leads to 'no one true native' debates, genomic studies may bring us all closer as people, with the recognition that wars simply had winners and losers and not all wars were fought with weapons.
News Articles
More Articles All Articles
About