News Staff
The "wheat belt" and "gold fields" of southern Western Australia are associated with a regional acid saline groundwater system. Groundwaters hosted in the Yilgarn Craton there have pH levels as low as 2.4 and salinities as high as 28%, which have greatly affected bedrock and subsurface sediments. This is manifested above ground as hundreds of shallow, ephemeral acid saline lakes.

In the June issue of GSA Today, Kathleen Benison of West Virginia University and Brenda Bowen of the University of Utah write that the limited volume of groundwater, in combination with its acidity, salinity, and high concentrations of some metals, make southern Western Australia a difficult place for human habitation.

The overarching question addressed by this study is "How did the extreme acidity form here?" The authors discuss the combination of processes that make up these shallow lakes and the groundwater that feeds them, which is not only dependent upon the host rock lithology, mineralogy, climate, weathering, organisms, and time, but also on mining and agriculture in the region. 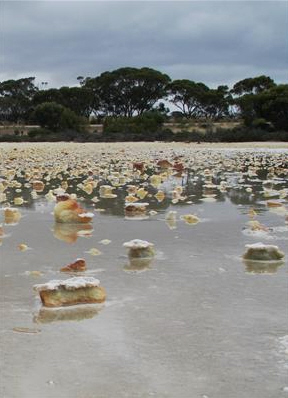 Benison and Bowen write, "In the twentieth century both agriculture and mining had local influence on acid brine groundwater. A government-sponsored effort to turn the semi-arid eucalypt forests of inland southern Western Australia to crop and ranchland promoted the deforestation of the 'wheat belt' region. With fewer trees to soak up the acid saline groundwater, the water table rose. Ranchers realized that cattle and sheep did not thrive with acid brines. Farmers found the only successful crops were grown high above the water table and irrigated with desalinized seawater piped a distance of hundreds of kilometers."

Mining efforts have also used desalinized seawater pipelines. Both mining and agriculture import fresher water to the groundwater system and may be responsible for changing the volume of groundwater slightly, as well as potentially causing dissolution of some subsurface halite and other chemical sediments, and, perhaps in turn, increasing groundwater salinity.