News Staff
Splash form tektites are tiny shards of natural glass created from spinning drops of molten rock flung from the earth during an extra-terrestrial impact, such as when the earth is hit by asteroids or comets.

They come in many shapes, from dumbbells to doughnuts, and how the shapes are formed has been the subject of scientific investigation for centuries.  Until now, the shapes of rapidly spinning, highly deformed droplets have been derived entirely from numerical simulations.

Using magnetic levitation to imitate weightlessness, researchers have manufactured solid wax models of these shapes.  It is hoped this new experimental technique can be used to better reproduce and understand tektite formation.

A droplet of liquid in space is spherical, but spin it and it forms all kinds of shapes from squashed balls to bone-shaped, depending on its rate of spin. Atomic nuclei, planets, including planet Earth, stars, and even black holes are deformed by their spin for the same reasons as a liquid droplet, as are tektites. 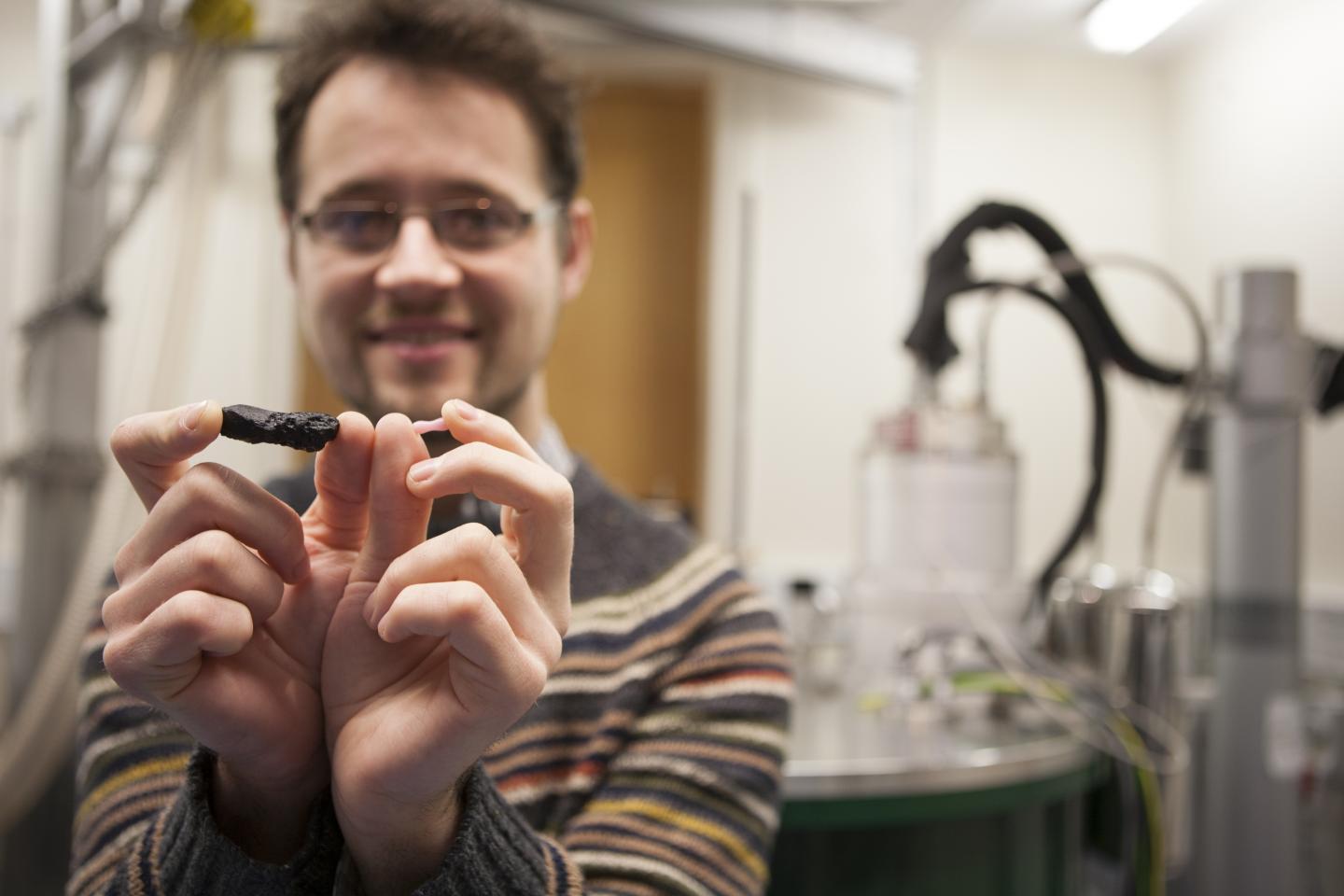 Baldwin with a splash form tektite. Credit: University of Nottingham

Dr Kyle Baldwin from The University of Nottingham School of Physics and Astronomy, said, "These wax models provide the first direct experimental validation for numerical models of the equilibrium shapes of spinning droplets. This research is of importance to fundamental physics and also to study of tektite formation.

"As you can imagine the creation of these tiny objects is difficult to reproduce in the lab. There aren't many materials that can contain molten rock, and even then you need to spin and cool a single droplet of it simultaneously."

These tiny glass objects are found mainly in Australasia, Central Europe, North America and the Ivory Coast -- in areas associated with extra-terrestrial impacts.

When an asteroid hits the Earth, it creates a large, very hot, zone of impact material. Under very specific impact conditions, this rock melts and is splashed out in all directions. Exactly what these conditions are remains a topic of debate today. These droplets of splashed rock often have rotation imparted by the impact. The act of rotation changes the shape of the drop, depending on how fast it is spinning. It deforms them towards a more flattened sphere, and then eventually to a "dumb-bell" shape as it becomes unstable and pulls apart.

The drops of molten rock spin, change shape, but then crucially, due to the fact that they are cooling as they travel through the atmosphere, solidify into the shape that they formed. Some of these shapes then survive impact with the Earth and are later collected by teams of geologists and studied to examine both the type of rock that the asteroid impacted and the age of the impacted the onlinrock, to correlate with known impact sites and prehistoric extinction events, or find impact sites that have not yet been discovered.

Baldwin said, "What I have done is realize that, using magnetic levitation and drops of wax, you can artificially recreate this process. By melting the wax on a hot plate, pipetting it into the magnetic field, spinning it up and then allowing it to cool, we can recreate some of the conditions that tektites are under as they form. We have primarily used this technique to measure the theoretical shapes of spinning drops, something that has never been done experimentally."

Baldwin entered this field of research as a post-doctoral fellow. Working alongside Dr. Richard Hill they began looking into levitating and spinning droplets. Using diamagnetic levitation to counteract the gravitational force on the droplet they were able to manufacture 'artificial tektites' from spinning molten wax droplets.

Baldwin said, "You could effectively remove gravity by going into orbit, or you could take a parabolic flight but it wouldn't be long enough. We use super conducting magnets to levitate liquids that are diamagnetic."

Hill said, "Kyle started working with me on this project just over two years ago. When he arrived, he had the brilliant idea of levitating molten wax and spinning it as it solidified, to capture its shape. We saw that the measurements could be used to validate numerical models of highly deformed spinning liquid droplets, relevant to nuclear physics and also to rapidly spinning astronomical objects."

The research was carried out in collaboration with Professor Samuel Butler from the Department of Geological Sciences at the University of Saskatchewan, Canada. Professor Butler has previously published papers on simulating tektite formation. He provided supporting simulation evidence that the shapes created by Dr Baldwin were the true equilibrium shapes of spinning liquid droplets allowed them to compare their results, sophisticated modern numerical simulations and calculations from literature.