Analysis of the wood from three 17th century shipwrecks in the Baltic Sea, the Ghost wreck, the Crown and the Sword, showed high concentrations of sulfur and iron using X-ray fluorescence (XRF) scanning.

Scientists from the same team have previously reported large amounts of sulfur and iron accumulation in the warship Vasa. In that study, the scientists found an outbreak of acidity and sulphate salts on the surface of the hull and other wooden objects.

Should we be worried if they lasted 400 years? It it true that these biological and chemical processes that occur naturally in low-oxygen waters and in sediments, but if sulfur and iron accumulation is commonly occurring in old waterlogged wooden shipwrecks, it can still be causing problems for ships in a museum environment, says co-author Yvonne Fors from the Department of Conservation at the University of Gothenburg.

The Ghost wreck (Spökskeppet in Swedish), a Dutch merchant vessel from the 1600s, was found by a private company while searching for the DC3 that vanished in the Baltic Sea in the 1950's. There are now plans to recover, and conserve it. 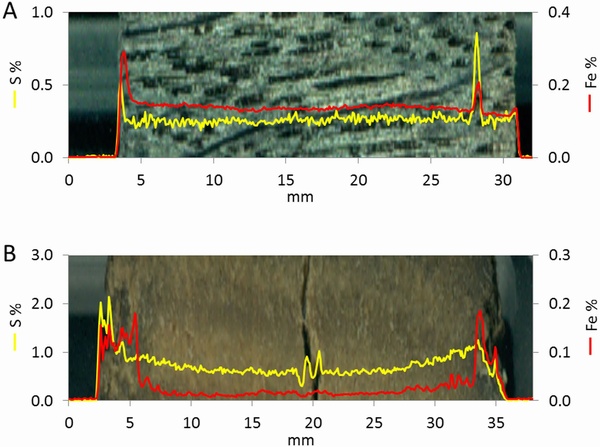 If the samples analyzed are representative of the entire hull, the ship may not have to face the same problems as the Vasa.

"The iron amounts in the wood seem to be comparatively low, and the potentially most aggressive sulfur compounds don't seem to occur in any significant levels. But we can't be more certain until we've done some more analyses. The more we know about the chemical composition of the wood, the better the conservation efforts can be prepared," says Fors.

The royal warship Crown may eventually be recovered, the authors say.

"We have analyzed samples from the Crown during a few years and have now also had the opportunity to analyse samples from the warship Sword, which was wrecked in the same battle in 1676"' says Fors.

The Crown displays potentially more aggressive sulfur compounds and higher iron concentrations than the Ghost wreck. Of the three studied ships, the highest levels of both sulphur and iron were found in wood samples from the Sword. Sulfur and iron accumulation in three marine-archaeological shipwrecks in the Baltic Sea is shown. Credit: University of Gothenburg

Similar accumulation has previously been analyzed in wood samples from the Vasa, Riksnyckeln, Götavraket, Stora Sofia, the British Mary Rose, the Australian Batavia and the Viking ships of Skuldelev.