Across the North Atlantic, shipwrecks scatter the seabed like the carcasses of prehistoric creatures. Bygone relics of sea exploration, trade, migration and conflict, these historical monuments are important sites of cultural interest. But they also form the basis of a burgeoning recreational dive tourism industry, and contribute substantially to the biodiversity and abundance of marine life.

The stories behind how these ships came to rest on the sea bed are intriguing. In the Orkney Isles off the north coast of Scotland, for example, a major naval event at the close of World War I set the wheels in motion for the creation of a world-renowned dive site of considerable historic and environmental value.

Scapa Flow and the German fleet

The captured German warship fleet (comprising 74 vessels) was interned in Scapa Flow, a sheltered body of water between the Orkney Mainland and the South Isles. In June 1919, as its fate was debated by the allied powers, Rear Admiral Ludwig von Reuter gave the order to his German crews to scuttle all ships to prevent the flotilla falling into enemy hands. A total of 52 ships were successfully sunk, leaving Scapa Flow an undersea graveyard of WWI German shipwrecks.

But this is a graveyard full of life. A hundred years later, marine habitats around the Scapa Flow wrecks are thriving. The waters teem with an abundance of sea creatures including crab, lobster, starfish, sea urchin and a variety of fish species. Recent surveys around the Orkney wrecks by Seasearch volunteer divers have also reported rarities such as the fan mussel and the common skate, now internationally scarce.

As well as being habitats where marine species can establish and flourish, these wrecks may also be some of the most biodiverse habitats of northern waters. Take the Karlsruhe for instance, a 112-metre German light cruiser, once operated by a crew of 475 men, now lying abandoned on its starboard side in 25 metres of water in Scapa Flow. Its toppled foredeck guns and armoured control tower can still be seen, creating an eerie but captivating scene.

Nearby, off the deck side of the resting hull, the seabed is covered by a horse mussel bed that hosts a range of species including brittle stars, herringbone hydroids, large predatory spiny starfish and seven-armed starfish. Sea cucumbers can also be found here among the dense clumps of horse mussels.


Horse mussels are bivalve molluscs similar to the well-known, edible blue mussel, but much larger and longer-lived. Their notable size and longevity, along with an ability to bind to one another via thin secreted threads called byssus, allow these creatures to create extensive reefs that provide habitat for a wealth of other marine creatures. This makes horse mussel reefs biodiversity hotspots, with some supporting hundreds of other species. These reefs also provide a number of beneficial ecosystem “services” including the provision of nursery grounds for commercial fisheries species.

Unfortunately, these reef habitats are currently listed as endangered in European waters, in part due to their historical destruction by bottom-towed fishing equipment like trawlers. But under climate change these optimal habitat conditions will vastly dwindle and push these reef habitats to their northern limits as more southern temperature conditions become intolerable.

Research into the specific impact of climate change on horse mussels is only beginning to emerge, but studies have shown that the effects on other bivalve species such as the blue/common mussel include changes in shell strength, disease and reproduction issues. 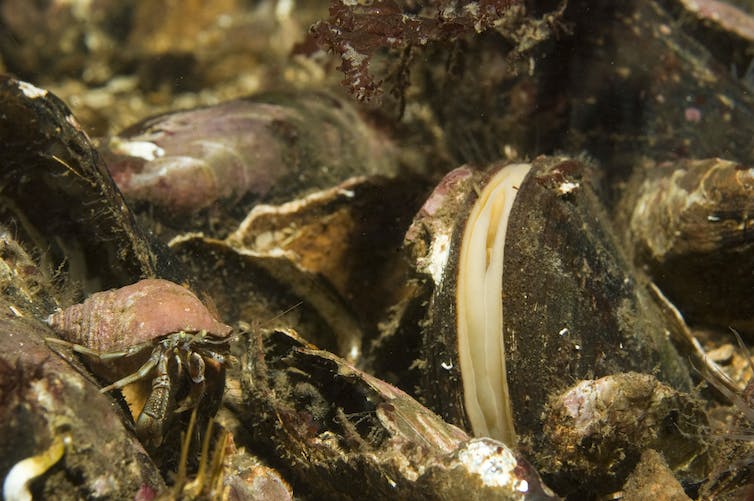 Marine biologists believe wrecks like the Karlsruhe may be instrumental in creating ideal hydrodynamic conditions for vital habitats like horse mussel reefs, but this is yet to be fully investigated. Wrecks may help to produce good feeding conditions, that is, sufficient water flow to maintain a supply of algal feed but not too vigorous that animals are unable to filter feed, and natural breaks and eddies in high current flow that allow for the settlement of mussel larvae on the sea floor.

Larvae are the microscopic offspring of invertebrate species which use ocean currents to move across large areas. In doing so, they ensure important genetic mixing between populations. Recent research by Heriot-Watt University researchers in collaboration with Scottish Natural Heritage has shown that the Karlsruhe horse mussel reef is likely genetically connected (via the transfer of genetic material between sites, termed “gene flow”) to horse mussel reefs hundreds of miles away along the west coast of Scotland. Whether settlement of larvae arriving from far-off sites could occur without the wreck in place remains unknown, but it’s certainly an interesting question to ponder. 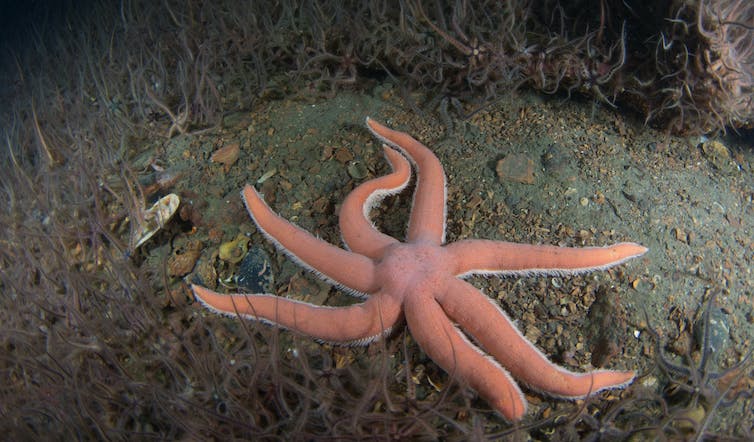 Luidia starfish can be found among the German shipwrecks. Jo Porter, Author provided

Unfortunately, deterioration of these sites is a major challenge faced by local, recreational and scientific diving operations in northern communities whose livelihoods rely heavily on these underwater habitats. The marine environments of northern regions like the Orkneys also face a serious threat from global climate change due to the accelerated rates of change occurring in polar regions. However, a lack of research on impacts has meant that communities face huge challenges in finding ways to react and adapt to these problems. Dive operators, researchers and volunteers continue to work together to document these historic relics and their ecological associations.

June 2019 marks the centenary of the sinking of German WWI warships in Scapa Flow. We should mark this important moment in history by drawing attention to these precious marine habitats so they may be protected for hundreds of years to come.