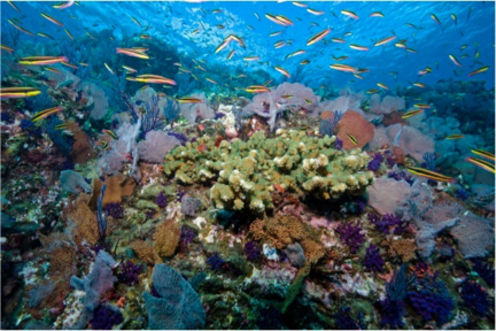 Looks healthy, but still lacks the big predatory fish... how would it rate on the Promonitor Index? AF Johnson, CC BY-NC-SA

We know that fishing has significant impacts on our oceans and the animals that live in them. Effects can range from habitat modification caused by bottom trawls, stock declines from overfishing or subtler consequences such as shifts in the structure and functioning of marine food webs.

Although such effects are ubiquitous and happen across many different marine systems, the difficulty of producing a standardized way of measuring them has often stymied scientists. And this type of health information is vital when making fisheries management decisions.

Recently a team from the Gulf of California Marine Program at the Scripps Institution of Oceanography decided to tackle this problem of gauging health in marine systems. Their goal was to develop a simple model that could easily evaluate the health of reefs, and in turn guide decisions on the potential effects of ocean protection. The team set out to produce an index that could be used to rate the health of rocky reef areas with different levels of protection from fishing. The researchers sampled 147 reefs across 1200 kilometers in the Gulf of California off Baja California. At each reef, they suited up in SCUBA gear to swim along underwater transect lines, counting and measuring all fish and invertebrate species they encountered.

By combining data on species, size, diversity and abundance, the team created 51 unique measures to describe each of the reefs. But 51 factors would lead to a very complicated model, and the idea was to come up with a simple way to describe marine communities and their health.

By analyzing the importance of each of these measures, the team filtered the 51 down to just five. These were:

These five factors were the most important in defining the health of a reef, best representing its animal community. The idea is that rather than doing an exhaustive survey, scientists would be able to make a reliable assessment of a reef’s health by measuring just these five variables. Healthy reefs that benefited from higher levels of protection from fishing showed a lot more big, predatory fishes than those in areas open to fishing. So a healthy reef is just as the postcards describe – colorful, with lots of big fishes.

In addition, they were the areas with the most complex sea bottoms, having many different shapes and sizes of rocky reefs interspersed with sand. The degraded reefs affected by chronic fishing pressure had high numbers of sea stars and sea urchins. As one might expect, these were more desolate landscapes, with fewer fish and high numbers of grazing organisms scouring the seabed in search of a meal.

Putting the index to work

Marine protected areas are becoming ever more common and popular as a method of conserving or regenerating diversity and fish biomass. The rebuilding of global fish stocks makes good economic sense but closing areas to fishing can initially result in economic losses for local communities who rely on the areas for fishing grounds. Decisions to close fisheries or set up marine protected areas need to be based on sound scientific advice, not randomly placed in the hope of net benefits in the long run.

It’s therefore imperative that once areas are closed to fishing, we can evaluate their success, whether the goal is biodiversity, habitat or fish biomass recovery. This Index of Reef Health is an easy way to make those kinds of assessments. The Index is simple and applicable across a range of different protection/fishing situations and can be applied to rocky reef habitats globally. It will allow scientists to both measure the health of reefs before and after proposed protections in order to better locate future marine protected areas and evaluate if protection measures are working.

In combination with work published last year that suggests significant changes in the fisheries management in the Gulf of California, the index is of real importance. Although protected reefs are, in general, healthy, those that are under-protected have a low species diversity and produce low fish biomass. The team hopes this work will aid in the future design of marine protected areas in the Gulf of California, increasing the diversity and biomass of local reefs that in the long run will benefit neighboring fisheries.

Andrew Frederick Johnson, Postdoctoral Researcher of Marine Biology at Scripps Institution of Oceanography at University of California, San Diego, receives funding the Gulf of California Marine Program. This article was originally published on The Conversation. Read the original article.