News Staff
Synchrotron Light Source II (NSLS-II) at Brookhaven National Laboratory only achieved first light a few weeks ago and already collaborators at the X-Ray Powder Diffraction (XPD) beamline have tested a setup that yielded data on thermoelectric materials. The work was part of the commissioning activities for the XPD beamline, a process that fine-tunes the settings of beamline equipment to ready the facility for first scientific commissioning experiments in mid-March on its way to full user operations later in the year.

To test the optical performance and components of the beamline, the XPD scientists put a material in the path of the x-ray beam and attempted to characterize its structure as the best way to identify and fix possible flaws or aberrations that the instrument could have caused. 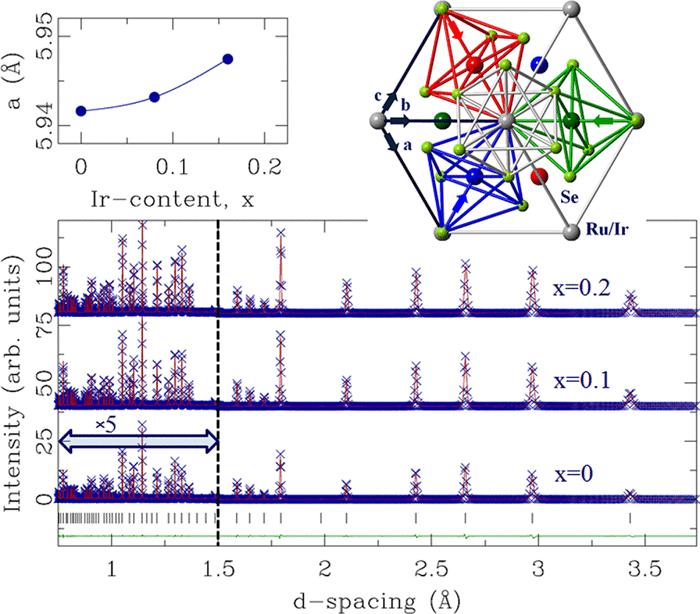 "Our colleagues at NSLS-II were commissioning the XPD beamline and we discussed the best sample for the instrument tuning, something that was going to be straightforward to measure. We realized we could use a sample that was also of scientific interest. It was one of the first things that was put in an NSLS-II beam shortly after the XPD team first opened the shutter," said Simon Billinge, a Brookhaven Lab physicist who co-authored the paper. "We were lucky. The sample gave valuable information allowing the beam to be tuned, but it also yielded an important scientific result."

That result revealed information about the relationship between the atomic structure of ruthenium diselenide (RuSe2) and its thermoelectric properties. Cedomir Petrovic, a Brookhaven Lab condensed matter physicist, was inspired to study diselenide because of its close chemical relationship to iron diantimonide, the material holding the world record for its thermoelectric power factor.

Thermoelectric materials hold promise for converting waste heat to electricity, as well as for solid-state refrigerators when worked in reverse. Good thermoelectric materials have high power factors and low thermal conductivities. The power factor is a product of thermopower and electrical conductivity. Petrovic reasoned that the little-studied RuSe2 compound would also have a high thermopower - and it did. But it also had a low electrical conductivity, making it less than ideal for real-world applications, and the NSLS-II data showed why.

When you place a temperature gradient across thermoelectric materials- with one end of the material hotter than the other - electrons at the warm end heat up and gain kinetic energy, eventually migrating toward the cool end. It's similar to a battery with a positive and negative end; the flow of electrons generates a voltage. The power factor measures how well this happens. If the material also conducts heat well, the cool end will warm up to match the hotter end and the flow will stop. Therefore, a good thermoelectric material has a high power factor but low thermal conductivity.

Petrovic's hunch that RuSe2 would have a high thermopower was borne out, but the power factor was limited by the material's low electrical conductivity. Milinda Abeykoon, who is part of the XPD team carrying out the commissioning, put the sample of this material in the beam to help the team find out why the electrical conductivity was low. The x-rays revealed how the atomic structure of ruthenium diselenide differs from iron antimony. In the latter, picture two pyramids with square bases that share an edge to make up the crystal structure. With ruthenium diselenide, it's not the bases that share common edges but the vertices, or corners, of these structures that touch. That small change in orientation means there are fewer channels the electrons can flow through, resulting in the low conductivity and the modest power factor, despite the good thermopower.

"Now that we understand this, we will explore ways to improve the thermoelectric properties of RuSe2, but we will have to concentrate on lowering the thermal conductivity while controlling any resulting defects and without introducing impurities. This will have to be done carefully, though, said Petrovic. "We need to find a way of decreasing or eliminating the thermal conductivity while maintaining the high thermopower."

XPD is designed for in situ and in operando studies of materials, so scientists can explore materials as they function under real operating conditions.

"It took me and my team many years to transform our conceptual ideas into a working state-of-the-art instrument," said Eric Dooryhee, who led the design and construction of XPD. "However, it is a testament to the dedication, effort and planning of the entire NSLS-II team---from the scientists, engineers, technicians and procurement and administrative staff through the numerous support teams to the specialists overseeing our safety that it all came together so smoothly. There is some magic to see this decade-long process deliver a very intense and stable beam right to the sample so quickly after turning on the machine. There is a real sense of pride here in how well all that work is paying off. As soon as we could safely stabilize and optimize the x-ray beam in the experimental endstation, we could not wait to benchmark the instrument with a real-world sample and see XPD address its first science case, which promises to be first of a long series."

The commissioning data were collected while NSLS-II was operating at just 5 milliamps of ring-current; NSLS-II is designed to provide 100 times more current, and ultrabright coherent x-ray beams.

"As the power of NSLS-II ramps up, we will eventually put a complete, operating, thermoelectric device in the XPD beam and watch how the structure changes in response to voltage and temperature changes," said Billinge. That's what's going to be possible with the very high brilliance of the beam that we'll have at NSLS-II when we have the full capability of the machine."