A team of scientists using NASA's Hubble Space Telescope to make the most detailed global map yet of the glow from a giant, oddball planet orbiting another star, an object twice as massive as Jupiter and hot enough to melt steel, called WASP-43b.

WASP-43b is a world of extremes, where winds howl at the speed of sound from a 3,000-degree-Fahrenheit dayside to a pitch-black nightside when temperatures plunge to a relatively cool 1,000 degrees Fahrenheit, still hot enough to melt silver.

The map provides information about temperatures at different layers of the planet's atmosphere and traces the amount and distribution of water present. The findings have ramifications for understanding the atmospheric dynamics and the formation of giant planets like Jupiter, said team leader Jacob Bean of the University of Chicago. "These measurements have opened the door for a new kind of comparative planetology."

As a ball of predominately hot hydrogen gas, there are no surface features on WASP-43b like oceans or continents that can be used to track its rotation, said CU-Boulder Assistant Professor Jean-Michel Désert, second author on the new study. Only the drastic temperature difference between the dayside and nightside can be used by remote observers to mark the passage of a day on the strange, gaseous planet, he said. 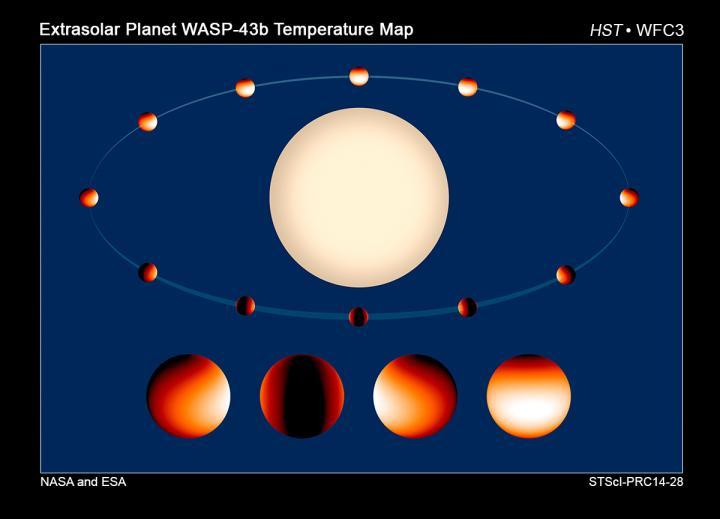 This is an artist's conception of exoplanet WASP-43b orbiting an orange dwarf star roughly 260 light-years from Earth. About twice as massive as Jupiter, WASP-43b heats up to about 3,000 degrees Fahrenheit during its closest passes by its star, a temperature hot enough to melt steel. Credit: NASA, ESA

"WASP-43b is extreme in many ways," said Désert. "It's the size of Jupiter with twice its mass. Its orbit around its host star, called an orange dwarf, takes only about 19 hours – the blink of an eye compared to the 365 days it takes Earth to orbit the sun."

Désert said the study is compelling to those trying to understand planetary formation. "Basically it is like taking a planet like Jupiter into a giant laboratory, then warming it at such a high temperature that all of the atoms and molecules comprising its atmosphere are in a gas phase."

Another bizarre thing about WASP-43b is its orbit. It orbits so close to its host star it always "shows" the same hemisphere, a phenomena similar to the orbit of the moon around Earth that is known as known as "tidal locking."

Discovered in 2011, WASP-43b is 260 light-years away -- too distant to be photographed. But because its orbit is observed "edge-on" to Earth, astronomers detected it by observing regular dips in the light of its parent star as the planet passed in front of it, said Désert of CU-Boulder's Department of Astrophysical and Planetary Sciences.

"These observations allow us to determine the abundance of water in the planet's atmosphere, which is a major element involved in planetary formation," said Désert. "By measuring the composition of this planet, we will have a better idea where it formed within the proto-planetary disk of the host star."

The scientists combined two previous methods of analyzing exoplanets -- planets outside our solar system -- and put them together for the first time to study the atmosphere of WASP-43b. Spectroscopy allowed them to determine the water abundance and temperature structure of the atmosphere. And, by observing the planet's rotation, the astronomers were also able to measure the water abundances and temperatures at different longitudes.

Because there's no planet with these tortured conditions in our solar system, characterizing the atmosphere of such a bizarre world provides a unique laboratory for better understanding planet formation and planetary physics. Water is thought to play an important role in the formation of giant planets, since comet-like bodies bombard young planets, delivering most of the water and other molecules that we can observe, according to the science team.

In order to understand how giant planets form, astronomers want to know how enriched they are in different elements. The team found that WASP-43b has about the same amount of water as would be expected for an object with the same chemical composition as Earth's sun.

For the first time astronomers were able to observe three complete rotations of a planet, which occurred during a span of four days. This was essential to making such a precise measurement according to Désert, also a faculty member at CU-Boulder's Center for Astrophysics and Space Astronomy (CASA).