News Staff
We've all felt sleepy after a big Thanksgiving meal and tryptophan usually gets the bad rap - but there simply isn't enough of it to make a difference. Yet clearly something is making many of us take longer naps after binging on supper.

A recent study examined 'food comas' using the fruit fly Drosophila melanogaster and explained some of the causes behind this phenomenon. They created a system that can measure both the sleep and feeding behaviors of individual fruit flies and discovered that, in much the same way as humans, the animals sleep for longer periods following larger meals. Further studies also revealed that certain types of food can promote post-meal sleep.

To better understand this relationship, a team created the Activity Recording CAFE (ARC), the first system for flies that enables visual tracking of food consumption and animal motion. Recordings of fruit flies' behavior from this system reveal that, after eating a meal, the animals sleep more before returning to a normal state of wakefulness. The sleep period generally lasts around 20 to 40 minutes, with flies that eat larger portions generally sleeping more. 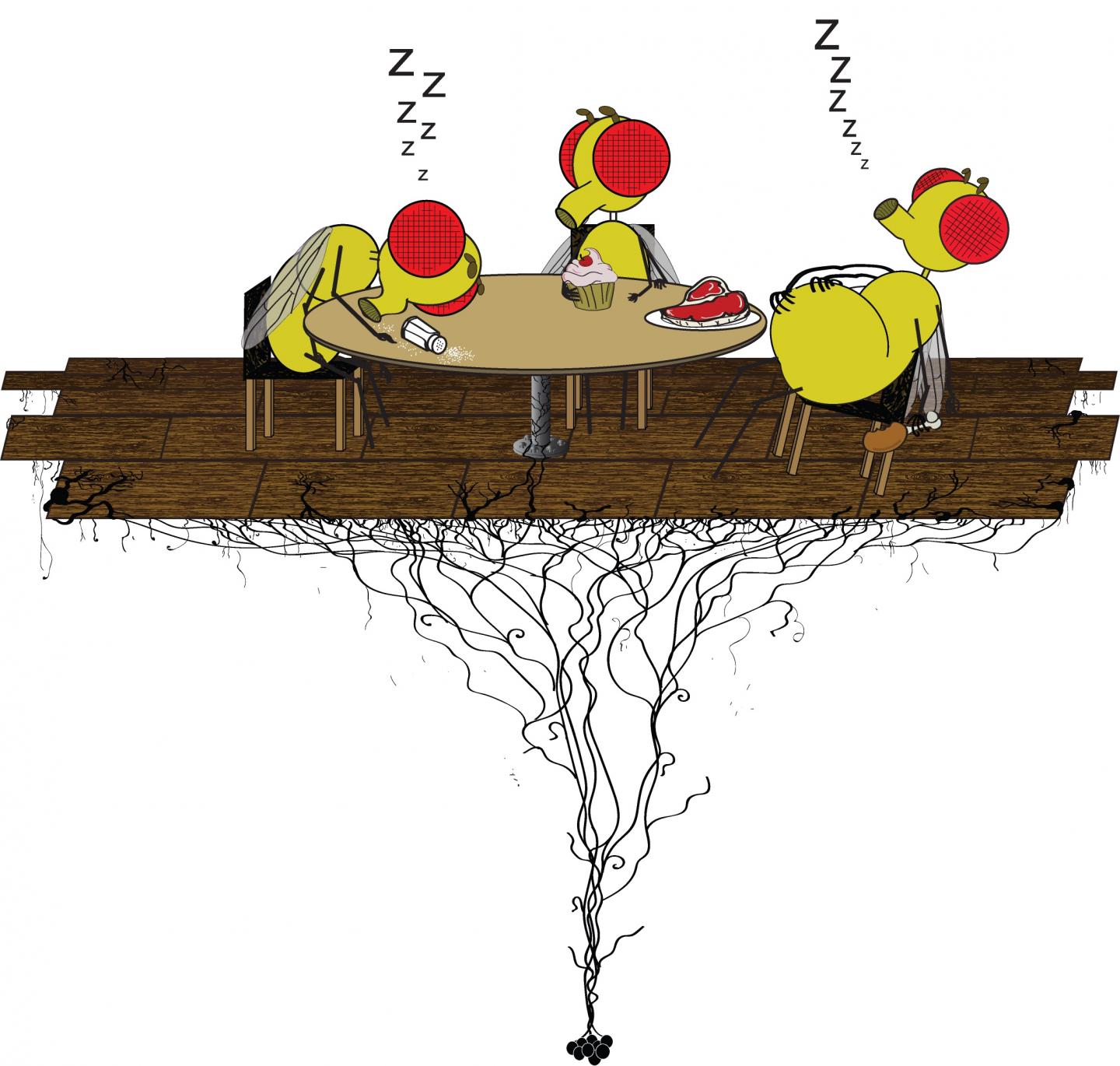 "In Drosophila, there is a well-documented interaction between sleep and metabolism, whereby flies suppress sleep or increase their activity when starved," says senior author William Ja, PhD, Associate Professor in the Department of Metabolism and Aging at Scripps Florida. "However, the acute effects of food consumption on sleep have not yet been tested, largely because there was no system available to do so."

To determine if individual nutrients could modulate post-meal sleep, the team gave the flies food consisting of protein, salt or sugar. They found that only protein and salt were effectors of post-meal sleep, suggesting that this form of sleep can indeed be regulated by specific food types.

"We next sought to identify a neuronal mechanism by which feeding drives post-meal sleep," explains first author Keith Murphy. "By using genetic tools to turn neurons on and off in the fly brain, we were surprised to find a number of circuits that play a role in controlling this behavior."

A previous study has shown that leucokinin (Lk) neurons are involved in meal-size regulation, indicating that this system acts rapidly during feeding to signal a behavioral shift. Building on this work, the authors of the current study demonstrate that the Lk system plays a role in post-meal sleep.

"A subset of leucokinin receptor (Lkr) neurons was necessary to initiate post-meal sleep in the presence of protein specifically," Murphy says. "While we expected that flies defective in protein sensing would experience post-meal sleep in a similar way to those fed only sucrose, we found instead that they had a waking response. Our analysis suggests that ingested protein promotes both sleep and wakefulness, and that the wakefulness is counterbalanced by Lkr neuronal activity."

They also found that other brain circuits are sensitive to the fruit fly's internal clock, reducing post-meal sleepiness only around dusk. Taking these results together, the team concludes that post-meal sleepiness can be regulated in a number of different ways in flies and humans alike.

"The ARC provides a starting point for future studies aimed at uncovering the exact genes and circuits that enable meal size, protein and salt to drive sleep," Ja adds. "As sleep is a vulnerable state for animals in nature, it will be interesting to discover why post-meal naps are necessary."