News Staff
The folks in Boston might feel like they are having a run of bad weather now, but it's nothing like the intense hurricanes, fueled by warmer oceans, that frequently pounded the region during the first millennium, from the peak of the Roman Empire into the height of the Middle Ages, according to a new study.

A new record of sediment deposits from Cape Cod, Massachusetts, shows evidence that 23 severe hurricanes hit New England between the years 250 and 1150 - a severe storm about once every 40 years on average. Many of these hurricanes were likely more intense than any that have hit the area in recorded history, according to the study. These prehistoric hurricanes were likely category 3 storms - like Hurricane Katrina -- or category 4 storms - like Hurricane Hugo -- that would be catastrophic if they hit the region today. 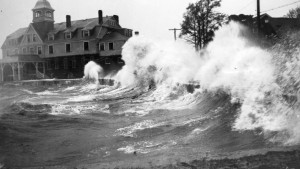 This 1938 hurricane is nothing compared to what warming in the last millennium brought.
Credit: WHOI

Basically, we've had a real lull in hurricanes in the last decade and the last thing we want is for the kinds of storms that happened the last time the planet got warmer. The study is the first to find evidence of historically unprecedented hurricane activity along the northern East Coast of the United States, according to Jeff Donnelly, a scientist at Woods Hole Oceanographic Institution in Massachusetts and lead author of the new paper. It also extends the hurricane record for the region by hundreds of years, back to the first century, he said.

"These records suggest that the pre-historical interval was unlike what we've seen in the last few hundred years," said Donnelly.

The most powerful storm to ever hit Cape Cod in recent history was Hurricane Bob in 1991, a category 2 storm that was one of the costliest in New England history. Storms of that intensity have only reached the region three times since the 1600s, according to Donnelly.

The intense prehistoric hurricanes were fueled in part by warmer sea surface temperatures in the Atlantic Ocean during the ancient period investigated than have been the norm off the U.S. East Coast over the last few hundred years, according to the study. However, as oceans temperatures have slowly inched upward in recent decades, the tropical North Atlantic sea surface has surpassed the warmth of prehistoric levels and is expected to warm further over the next century as the climate heats up, Donnelly said. 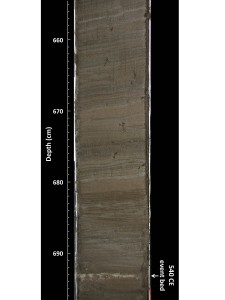 A section of sediment core from Salt Pond. The light colored sand layer at 693 cm (22.7 feet) down the core provides evidence of an intense storm that occurred approximately in 540 AD, about 1,080 years before the first Europeans settle New England. Credit: Jeffrey Donnelly, WHOI

He said the new study could help scientists better predict the frequency and intensity of hurricanes that could hit the U.S. East and Gulf coasts in the future.

"We hope this study broadens our sense of what is possible and what we should expect in a warmer climate," Donnelly said. "We may need to begin planning for a category 3 hurricane landfall every decade or so rather than every 100 or 200 years."

"The risk may be much greater than we anticipated," he added.

Donnelly and his colleagues examined sediment deposits from Salt Pond near Falmouth on Cape Cod. The pond is separated from the ocean by a 1.3- to 1.8-meter (4.3- to 5.9-foot) high sand barrier. Over hundreds of years, strong hurricanes have deposited sediment over the barrier and into the pond where it has remained undisturbed.

The researchers extracted nine-meter (30-foot) deep sediment cores that they then analyzed in a laboratory. Similar to reading a tree ring to tell the age of a tree and the climate conditions that existed in a given year, scientists can read the sediment cores to tell when intense hurricanes occurred.

The study's authors found evidence of 32 prehistoric hurricanes, along with the remains of three documented storms that occurred in 1991, 1675 and 1635.

The prehistoric sediments showed that there were two periods of elevated intense hurricane activity on Cape Cod - from 150 to 1150 and 1400 to 1675. The earlier period of powerful hurricane activity matched previous studies that found evidence of high hurricane activity during the same period in more southerly areas of the western North Atlantic Ocean basin - from the Caribbean to the Gulf Coast. The new study suggests that many powerful storms spawned in the tropical Atlantic Ocean between 250 and 1150 also battered the U.S. East Coast.

The deposits revealed that these early storms were more frequent, and in some cases were likely more intense, than the most severe hurricanes Cape Cod has seen in historical times, including Hurricane Bob in 1991 and a 1635 hurricane that generated a 20-foot storm surge, according to Donnelly.