Astronomers have used Hubble to measure the distances to stars in nineteen galaxies more accurately than previously possible. They found that the Universe is currently expanding faster than the rate derived from measurements of the Universe shortly after the Big Bang. If confirmed, this apparent inconsistency may be an important clue to understanding three of the Universe's most elusive components: dark matter, dark energy and neutrinos.

A team of astronomers have discovered that the Universe is expanding between five and nine percent faster than previously calculated. This is in clear discrepancy with the rate predicted from measurements of the infant Universe. One possible explanation for this unexpectedly fast expansion of the Universe is a new type of subatomic particle that may have changed the balance of energy in the early Universe, so called dark radiation.

The team made the discovery by refining the measurement of how fast the Universe is expanding, a value called the Hubble constant, to unprecedented accuracy, reducing the uncertainty to only 2.4 percent.

This new measurement presents a puzzle because it does not agree with the expansion rate found by looking at the moments shortly after the Big Bang. Measurements of the afterglow from the Big Bang from NASA's Wilkinson Microwave Anisotropy Probe (WMAP)and the European Space Agency's Planck satellite mission yield smaller predictions for the Hubble constant. 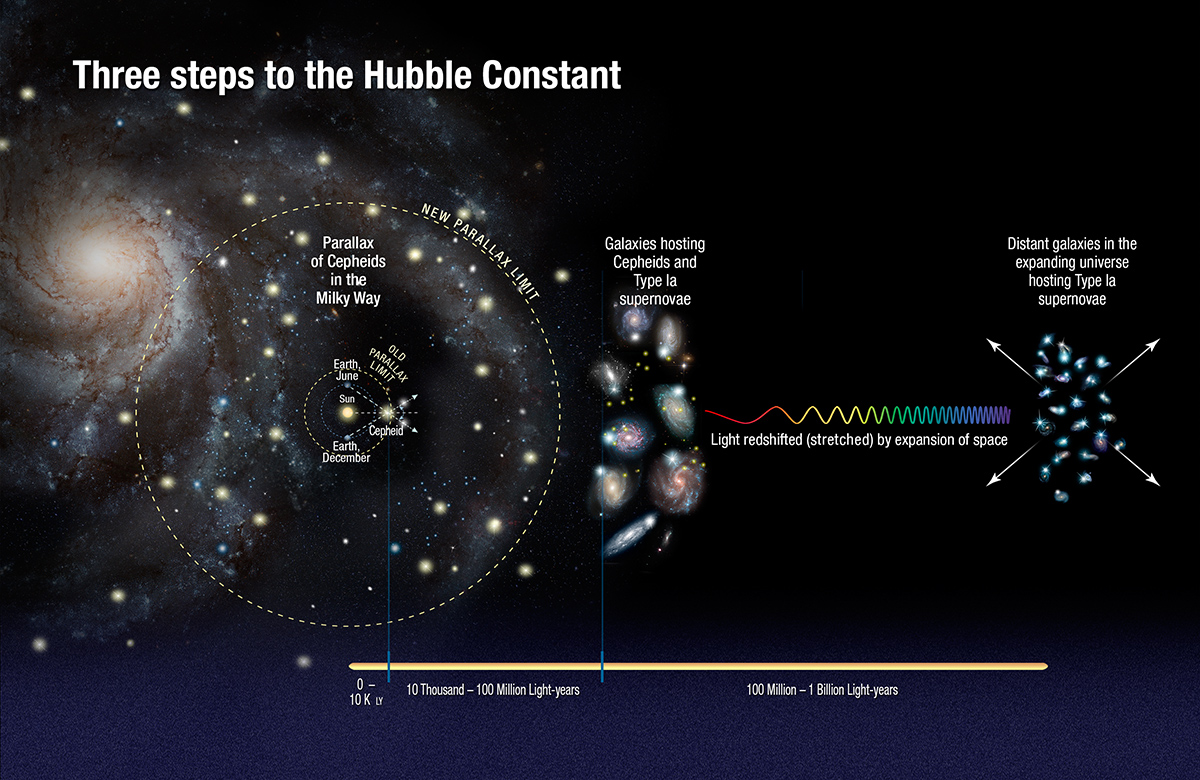 This illustration shows the three steps astronomers used to measure the universe's expansion rate to an unprecedented accuracy, reducing the total uncertainty to 2.4 percent. Astronomers made the measurements by streamlining and strengthening the construction of the cosmic distance ladder, which is used to measure accurate distances to galaxies near and far from Earth. Beginning at left, astronomers use Hubble to measure the distances to a class of pulsating stars called Cepheid variables, employing a basic tool of geometry called parallax. This is the same technique that surveyors use to measure distances on Earth. Once astronomers calibrate the Cepheids' true brightness, they can use them as cosmic yardsticks to measure distances to galaxies much farther away than they can with the parallax technique. The rate at which Cepheids pulsate provides an additional fine-tuning to the true brightness, with slower pulses for brighter Cepheids. The astronomers compare the calibrated true brightness values with the stars' apparent brightness, as seen from Earth, to determine accurate distances. Once the Cepheids are calibrated, astronomers move beyond our Milky Way to nearby galaxies (shown at center). They look for galaxies that contain Cepheid stars and another reliable yardstick, Type Ia supernovae, exploding stars that flare with the same amount of brightness. The astronomers use the Cepheids to measure the true brightness of the supernovae in each host galaxy. From these measurements, the astronomers determine the galaxies' distances. They then look for supernovae in galaxies located even farther away from Earth. Unlike Cepheids, Type Ia supernovae are brilliant enough to be seen from relatively longer distances. The astronomers compare the true and apparent brightness of distant supernovae to measure out to the distance where the expansion of the universe can be seen (shown at right). They compare those distance measurements with how the light from the supernovae is stretched to longer wavelengths by the expansion of space. They use these two values to calculate how fast the universe expands with time, called the Hubble constant. Credit: NASA, ESA, A. Feild (STScI), and A. Riess (STScI/JHU)

"This surprising finding may be an important clue to understanding those mysterious parts of the Universe that make up 95 percent of everything and don't emit light, such as dark energy, dark matter, and dark radiation," explains Nobel Laureate Adam Riess of the Space Telescope Science Institute and the Johns Hopkins University.

Comparing the Universe's expansion rate as calculated by WMAP and Planck (for the time after the Big Bang) and Hubble (for our modern Universe) is like building a bridge, Riess explains: "You start at two ends, and you expect to meet in the middle if all of your drawings are right and your measurements are right. But now the ends are not quite meeting in the middle and we want to know why."

This refined determination of the Hubble constant was made possible by making precise measurements of the distances to both nearby and faraway galaxies using Hubble [2]. The improved distance measurements were made by streamlining and strengthening the cosmic distance ladder, which astronomers use to measure accurate distances to galaxies. The team compared these measured distances with the expansion of space as measured by the stretching of light from receding galaxies and these two values were then used to calculate the Hubble constant.