News Staff
At the very large and very small levels, gravity does not really work the way it should. At the very large level, instead of contracting, the universe has both expanded and accelerated despite detectable forces that could cause it.

Measurements to determine how fast the Universe is expanding over time are known as the Hubble constant. It has been determined by a cosmic distance ladder, calculated by observing pulsating stars called Cepheid variables in a neighboring satellite galaxy known as the Large Magellanic Cloud, 162,000 light-years away.

When defining the distances to galaxies that are further and further away, these Cepheid variables are used as milepost markers.

But as measurements became more precise, their calculation of the Hubble constant remained inconsistent with the expected value derived from observations of the early Universe’s expansion made by the European Space Agency’s Planck satellite. These measurements map a remnant afterglow from the Big Bang known as the Cosmic Microwave Background, which help scientists to predict how the early Universe would likely have evolved into the expansion rate astronomers can measure today. 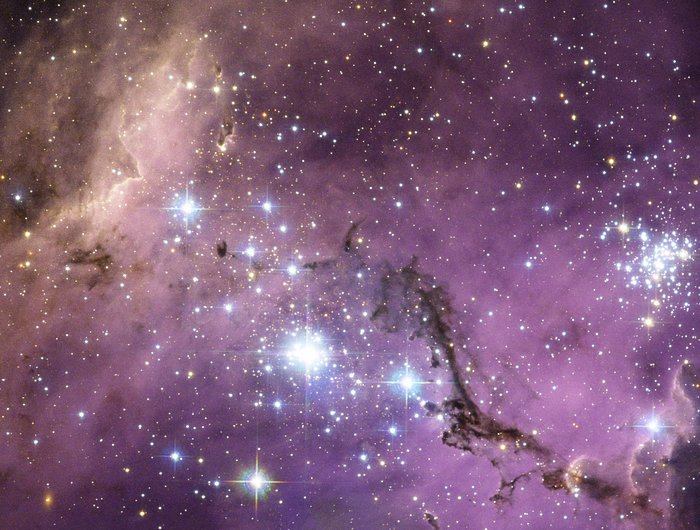 The Large Magellanic Cloud, a satellite galaxy of the Milky Way. As the Milky Way’s gravity gently tugs on its neighbor’s gas clouds, they collapse to form new stars. In turn, these light up the gas clouds in a kaleidoscope of colors, visible in this image from the NASA/ESA Hubble Space Telescope. Credit: NASA, ESA. Acknowledgement: Josh Lake

But they were obviously estimates. Before Hubble was launched in 1990, estimates of the Hubble constant varied by a factor of two. Then the Hubble telescope was used to refine the Extragalactic Distance Scale to within 10 percent, accomplishing one of the telescope’s key goals. In 2016, astronomers using Hubble discovered that the Universe is expanding between five and nine percent faster than previously calculated by refining the measurement of the Hubble constant and further reducing the uncertainty to only 2.4 percent.

As a result the likelihood that this discrepancy between measurements of today’s expansion rate of the Universe and the expected value based on the early Universe’s expansion is a fluke is just 1 in 100,000, a significant improvement from a previous estimate last year of 1 in 3,000.

To reach this conclusion, lead researcher and Nobel Laureate Adam Riess of the Space Telescope Science Institute (STScI)  and his team analyzed the light from 70 Cepheid variables in the Large Magellanic Cloud. Because these stars brighten and dim at predictable rates, and the periods of these variations give us their luminosity and hence distance, astronomers use them as cosmic mileposts. Riess’s team used an efficient observing technique called Drift And Shift (DASH) using Hubble as a “point-and-shoot” camera to snap quick images of the bright stars. This avoids the more time-consuming step of anchoring the telescope with guide stars to observe each star. The results were combined with observations made by the Araucaria Project, a collaboration between astronomers from institutions in Europe, Chile, and the United States, to measure the distance to the Large Magellanic Cloud by observing the dimming of light as one star passes in front of its partner in a binary-star system.

Because cosmological models suggest that observed values of the expansion of the Universe should be the same as those determined from the Cosmic Microwave Background, new physics may be needed to explain the disparity. Various scenarios have been proposed to explain the discrepancy, but there is yet to be a conclusive answer. a so far undetectable form of "matter" known under the umbrella term "dark matter" may interact more strongly with normal matter than astronomers previously thought. Or perhaps that is accompanied by the far more speculative umbrella term "dark energy", an essentially unknowable form of energy that pervades space, is responsible for accelerating the expansion of the Universe.

The god of the gaps remains, but it continues to retreat to smaller corners of the universe.
News Articles
More Articles All Articles
About