Roughly 90 percent of the biggest black holes are dormant, meaning that they are not actively devouring matter and therefore not giving off any light or other radiation.

Yet dormant is not dead, so when a star wanders too close, the ensuing feeding frenzy - a tidal disruption event - sets off a spectacular fireworks show.

For the first time, astronomers have been able to document X-rays bouncing around deep within the walls of a once-dormant black hole's newly formed accretion disk--the giant, puffy cloud of shredded star stuff circling the black hole, waiting for its turn to be swallowed up--following a tidal disruption event. Using these data, the researchers discerned the shape and activity of the accretion disk near a supermassive black hole named Swift J1644+57.

This marks the first time such detailed observations have been made for a dormant supermassive black hole. In addition, the team's methodology could open the door to reliable measurements of black hole spin in the near future. 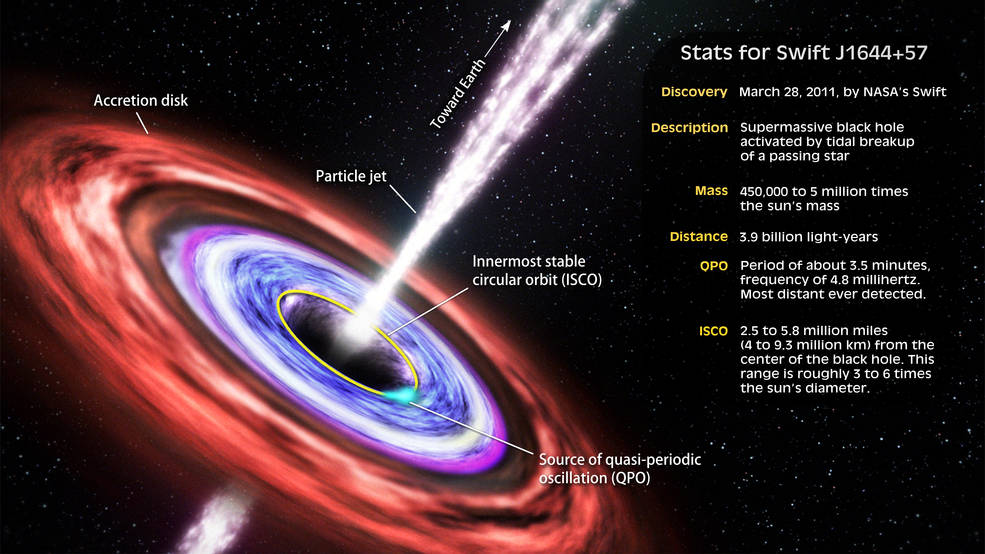 In this artist's rendering, a thick accretion disk has formed around a supermassive black hole following the tidal disruption of a star that wandered too close. Stellar debris has fallen toward the black hole and collected into a thick, chaotic disk of hot gas. Flashes of X-ray light near the center of the disk result in light echoes that allow astronomers to map the structure of the funnel-like flow, revealing -- for the first time -- strong gravity effects around a normally quiescent black hole. Credit: NASA/Swift/Aurore Simonnet, Sonoma State U.

"Most tidal disruption events don't emit much in the high-energy X-ray band. But there have been at least three known events that have, and this is the first and only such event that has been caught at its peak," said Erin Kara, a Hubble Postdoctoral Fellow in astronomy at UMD and the Joint Space-Science Institute and lead author on the study. "NASA's Swift satellite saw it first and triggered the European Space Agency's XMM-Newton satellite and the Japanese Aerospace Exploration Agency and NASA's Suzaku satellite to target it for follow-up. So we have excellent data. We're lucky that the one event we have is showing us all these exciting new things."

The accretion disk has an effect somewhat like the reflective shield behind a flashlight bulb, reflecting, amplifying and focusing the radiation. The fact that X-rays can originate deep within the accretion disk of a tidal disruption event is surprising, according to Kara. Conventional wisdom among astronomers has long held that, during a tidal disruption event, high-energy X-rays are created further from the black hole in the relativistic jets--huge beams of particles ejected by the black hole and accelerated to nearly the speed of light. But seeing X-ray emissions bouncing off the walls of the inner accretion disk has cast a new light on this assumption.

"Before this result, there was no clear evidence that we were seeing into the innermost regions of the accretion disk," Kara said. "We thought the emission was from the jet pointed at us, or further away and not close to central black hole. This new study shows us that, actually, we can see this reverberation at work very close to the central black hole."

"Understanding the black hole population in general is important. Black holes have played an important role in how galaxies evolved. So even if they're dormant now, they weren't before," said Chris Reynolds, a professor of astronomy at UMD and a Fellow at the Joint Space-Science Institute who is a co-author on the study. "If we only look at active black holes, we might be getting a strongly biased sample. It could be that these black holes all fit within some narrow range of spins and masses. So it's important to study the entire population to make sure we're not biased."

Swift J1644+57 consumed the material from the shredded star so quickly, the event briefly exceeded the Eddington Limit--the theoretical maximum "speed limit" that defines how fast a black hole can consume matter. This finding can help astronomers to understand how supermassive black holes grow to their enormous masses--up to several million times the mass of the sun.

"The meaning of this extends far beyond the studies of tidal disruption events," said Lixin Dai, a postdoctoral associate in physics at UMD and the Joint Space-Science Institute who is a co-author on the study. "It can help us understand how the biggest black holes in the universe formed and co-evolved with their host galaxies."

The team used X-ray reverberation mapping to chart out the inside of the accretion disk. Much like sound waves can be used to map the seafloor or canyons by measuring the time delays of sound echoes, Kara, Reynolds and their colleagues computed small delays in the arrival time of X-ray signals reflected from iron atoms in the accretion disk.

"We know how sound echoes in a large auditorium, for example. Because we know the speed of sound, we can use the time delay information to calculate the shape of the auditorium," Kara explained. "We are doing the same with X-ray radiation to map out the inner accretion disk. It's a cool, novel technique that has only been developed within the last six years."

"Looking at tidal disruption events with reverberation mapping might help us probe the spin of black holes in the future," Reynolds said. "But just as importantly, we can follow along after an event and watch how the accretion disk spins down and energy dissipates as the black hole returns to a quiescent state. We might finally be able to observe all of these various states that, so far, we only know from theory textbooks."