Crops genetically engineered to produce proteins from the bacterium Bacillus thuringiensis (Bt) to control insect pests have been planted on a cumulative total of more than a billion acres worldwide since 1996 and they have been very successful.

But pests evolve just like everything else and to avoid that, companies recommend a variety of strategies to avoid 'herd immunity'. Biotech companies have also introduced Bt crops called "pyramids" that produce two or more Bt toxins active against the same pest. They have been adopted in many countries since 2003, including the United States, India and Australia.

But they are not perfect, according to a new review of studies. 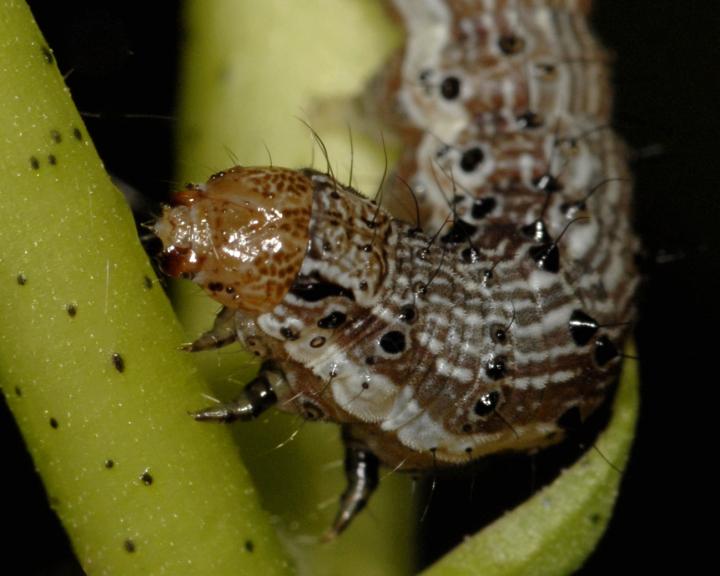 Despite extensive planting of transgenic cotton that produces two toxins active against the cotton bollworm (Helicoverpa zea), insecticide sprays against this voracious caterpillar pest have increased in the United States. Credit: Alex Yelich, The University of Arizona

To assess the potential of pyramids to delay evolution of resistance by pests, Yves Carrière and co-author Bruce Tabashnik from the University of Arizona did a review of 38 studies that report effects of 10 Bt toxins used in transgenic crops against 15 insect pests. They found that in many cases, the crops' actual efficacy against pests did not live up to the expectations used to inform computer simulation models that aim to predict the evolution of pest resistance.

Like in any field of science, simulations that use inaccurate data for parameters may not lead to the best conclusions or policy decisions.

"The idea behind Bt crop pyramids can be explained with a lock-and-key analogy," said Tabashnik, who heads the Department of Entomology. "The lock on the door is the receptor protein in the insect's gut, and the key is the Bt toxin that binds to that receptor. To be able to kill the insect, the toxin must fit the lock to open the door and get inside.

"If you have only one key - one toxin - and a mutation has changed the lock - the receptor - then the toxin can't open the door and get inside. The insect is resistant and survives. Now imagine you have two keys, one for the front door and a different one for the back door. Let's say you're trying to get in through the front door, but the key doesn't work because the lock has changed. Your second key will get you in through the back door, provided the lock there hasn't changed as well. So, if you can't kill the insect one way, you can kill it another way. That's how pyramids work. It's like having two different keys, so the insect needs two different mutations to become resistant."

How well does reality match the example above? Not often, according to the review. At the other extreme, some Bt crop pyramids could have two toxins that bind to the same receptor.

"In that scenario, the keys are so similar that each only opens the front door, and if that lock is changed, you're out of luck," Tabashnik said.

The reality, the authors found in this study, is often somewhere in between.

"If each toxin is highly effective on its own and two toxins act independently, the pyramid should kill at least 99.75 percent of the Bt-susceptible pests," explained Carrière, a professor of entomology in the UA's College of Agriculture and Life Sciences. "In other words, fewer than three of every thousand susceptible insects should survive."

Scrutinizing the scientific literature, Carrière and Tabashnik discovered that this assumption was met only in about half of the cases. They also found that, contrary to the ideal scenario typically assumed, selection for resistance to one toxin in a pyramid often causes cross-resistance to another toxin in the pyramid.

One goal of this study, Carrière explained, is to help biotech companies decide which toxins to put in their pyramided crops based on data that already exist, rather than by a time-consuming process of trial and error. "Will two toxins behave as one key or two keys, or somewhere in between?" he said. "And can we use understanding of how these toxins work to answer that question?"

To help find answers, Neil Crickmore of the University of Sussex, an expert in Bt toxin structure and function who co-authored the study, used data available online to analyze the similarity of toxins in each of their three component parts, called domains. Consistent with previous biochemical work showing that the middle domain of the toxins plays a key role in binding to receptors, the new study shows that cross-resistance between toxins is associated with their amino acid sequence similarity in this domain. Results from the new study also indicate that amino acid sequence similarity in another domain contributes to mortality of Bt-susceptible insects on pyramids.

"We identified specific domains involved in expression of traits that govern evolution of resistance to pyramids, and propose that toxins with different amino acid similarity in these domains could be combined to produce more effective and durable pyramids," Carrière said. "With the available technology, it is now possible to swap domains and engineer each Bt toxin with the desired domain configuration. The information provided in our study could help the design of such chimeric toxins used in pyramids."

The authors emphasized that their work provides the community with systematic procedures that can be used by anyone working on these questions, including larger datasets and other toxins.

"Our results mean that the keys - toxins - used in Bt crops by farmers worldwide are often not as different from each other as we would like," Tabashnik said. "And that, in turn, has huge implications for agencies tasked with setting standards for the size of refuges to be planted."

The refuge strategy is the primary approach used to delay pest resistance to Bt crops in the United States and elsewhere. This strategy is based on the idea that refuges, which consist of non-Bt host plants near or in fields of Bt crops, produce susceptible pests that mate with the rare resistant individuals surviving on Bt crops. In Arizona, the refuge strategy worked brilliantly against the pink bollworm, where the pest had plagued cotton farmers for a century but is now scarce. In India, on the other hand, where farmers did not plant refuges, pink bollworm rapidly evolved resistance to Bt cotton.

The data from this study could help modelers make more accurate predictions of how a certain pyramided Bt crop will perform and help policy makers determine refuge strategies more realistically.

"We provide a realistic assessment of which Bt toxins do meet the two-key assumption and work well together so farmers can use small refuges," Tabashnik said, "and which ones are closer to the one-key scenario, so larger refuges are needed or we'll have problems."