COLUMBUS, Ohio—Our view of other solar systems just got a little more familiar, with the discovery of a planet 25,000 light-years away that resembles our own Uranus.

Astronomers have discovered hundreds of planets around the Milky Way, including rocky planets similar to Earth and gas planets similar to Jupiter, but there is a third type of planet in our solar system — part gas, part ice, like Uranus and Neptune — called an "ice giant" and researchers have spotted one outside Sol's orbit for the first time.

But let's not build a cute robot and send it there just yet; it's 25,000 light years away.

While Uranus and Neptune are mostly composed of hydrogen and helium, they both contain significant amounts of methane ice, which gives them their bluish appearance. Given that the newly discovered planet is so far away, astronomers can't actually tell anything about its composition. But its distance from its star suggests that it's an ice giant—and since the planet's orbit resembles that of Uranus, the astronomers are considering it to be a Uranus analog. 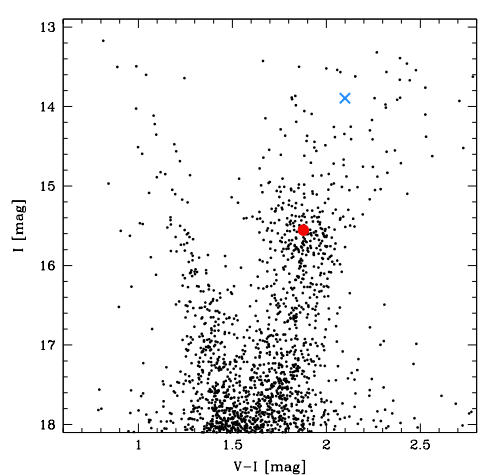 Regardless, the newly discovered planet leads a turbulent existence: it orbits one star in a binary star system, with the other star close enough to disturb the planet's orbit.

The find may help solve a mystery about the origins of the ice giants in our solar system, said Andrew Gould, professor of astronomy at Ohio State.

"Nobody knows for sure why Uranus and Neptune are located on the outskirts of our solar system, when our models suggest that they should have formed closer to the sun," Gould said. "One idea is that they did form much closer, but were jostled around by Jupiter and Saturn and knocked farther out. Maybe the existence of this Uranus-like planet is connected to interference from the second star. Maybe you need some kind of jostling to make planets like Uranus and Neptune."

The astronomers spotted the solar system due to a phenomenon called gravitational microlensing—when the gravity of a star focuses the light from a more distant star and magnifies it like a lens. Very rarely, the signature of a planet orbiting the lens star appears within that magnified light signal.

In this case, there were two separate microlensing events, one in 2008 that revealed the main star and suggested the presence of the planet, and one in 2010 that confirmed the presence of the planet and revealed the second star. Both observations were done with the 1.3-meter Warsaw Telescope at Las Campanas Observatory in Chile as part of the Optical Gravitational Lensing Experiment (OGLE).

Radek Poleski, postdoctoral researcher at The Ohio State University,
led the analysis, which entailed combining the two OGLE observations. When he did, he was able to calculate the masses of the two stars and the planet, and their distances from one another—a feat that he says can only be done via microlensing.

"Only microlensing can detect these cold ice giants that, like Uranus and Neptune, are far away from their host stars. This discovery demonstrates that microlensing is capable of discovering planets in very wide orbits," Poleski said.

"We were lucky to see the signal from the planet, its host star, and the companion star. If the orientation had been different, we would have seen only the planet, and we probably would have called it a free-floating planet," he added.

The 2008 and 2010 events are part of the OGLE database, which contains 13,000 microlensing events that have been recorded since the project began. Part of Poleski's job at Ohio State entails writing software to mine the database for other possible connections that could lead to additional planet discoveries—including more ice giants.

and this is the first time anyone has spotted a twin for our so-called "ice giant" planets, Uranus and Neptune.