News Staff
Antioxidants reduce oxidative stress caused by our body's internal energy production, fighting off infection, and repairing damage. Our bodies produce them naturally and they can be obtained less efficiently in food, but with over 200 conditions related to mitochondria, the energy factories in our cells, the future belongs to treatments that can repair damage to them.

Toward that goal, researchers have created injectable nanoparticles that could protect an injured person from further damage due to oxidative stress. In 2012, scientists at Rice University, Baylor College of Medicine and the University of Texas Health Science Center at Houston (UTHealth) Medical School discovered that combined polyethylene glycol-hydrophilic carbon clusters -- known as PEG-HCCs -- could quickly stem the process of overoxidation that can cause damage in the minutes and hours after an injury. 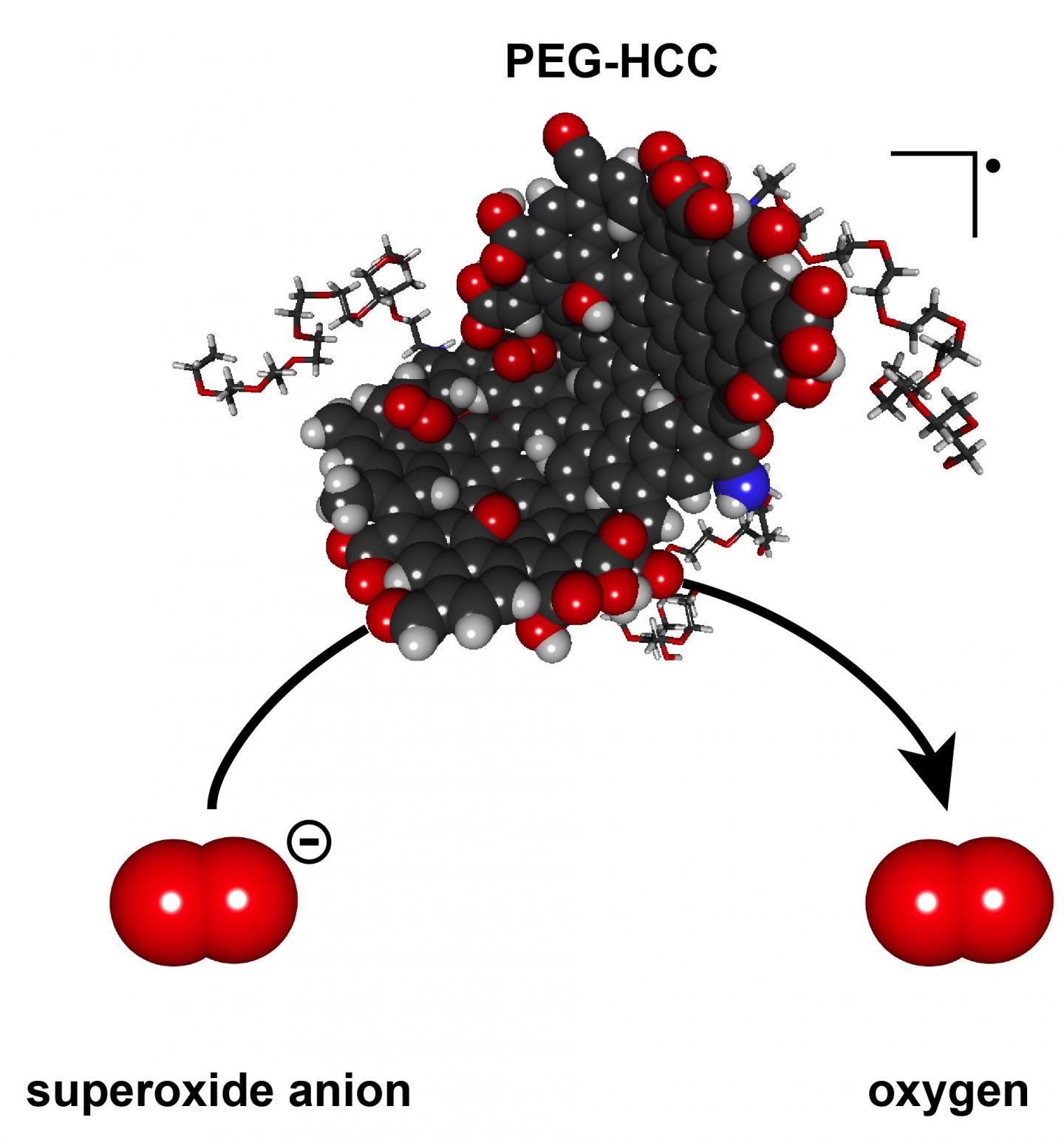 Polyethylene glycol-hydrophilic carbon cluster has the potential to quench the overexpression of damaging superoxides through the catalytic turnover of reactive oxygen species. Credit: Errol Samuel/Rice University

The tests revealed a single nanoparticle can quickly catalyze the neutralization of thousands of damaging reactive oxygen species molecules that are overexpressed by the body's cells in response to an injury and turn the molecules into oxygen. These reactive species can damage cells and cause mutations, but PEG-HCCs appear to have an enormous capacity to turn them into less-reactive substances.

The researchers hope an injection of PEG-HCCs as soon as possible after an injury, such as traumatic brain injury or stroke, can mitigate further brain damage by restoring normal oxygen levels to the brain's sensitive circulatory system.

The results were reported today in the Proceedings of the National Academy of Sciences.

"Effectively, they bring the level of reactive oxygen species back to normal almost instantly," said Rice chemist James Tour. "This could be a useful tool for emergency responders who need to quickly stabilize an accident or heart attack victim or to treat soldiers in the field of battle." Tour led the new study with neurologist Thomas Kent of Baylor College of Medicine and biochemist Ah-Lim Tsai of UTHealth.

PEG-HCCs are about 3 nanometers wide and 30 to 40 nanometers long and contain from 2,000 to 5,000 carbon atoms. In tests, an individual PEG-HCC nanoparticle can catalyze the conversion of 20,000 to a million reactive oxygen species molecules per second into molecular oxygen, which damaged tissues need, and hydrogen peroxide while quenching reactive intermediates.

Tour and Kent led the earlier research that determined an infusion of nontoxic PEG-HCCs may quickly stabilize blood flow in the brain and protect against reactive oxygen species molecules overexpressed by cells during a medical trauma, especially when accompanied by massive blood loss.

Their research targeted traumatic brain injuries, after which cells release an excessive amount of the reactive oxygen species known as a superoxide into the blood. These toxic free radicals are molecules with one unpaired electron that the immune system uses to kill invading microorganisms. In small concentrations, they contribute to a cell's normal energy regulation. Generally, they are kept in check by superoxide dismutase, an enzyme that neutralizes superoxides.

But even mild traumas can release enough superoxides to overwhelm the brain's natural defenses. In turn, superoxides can form such other reactive oxygen species as peroxynitrite that cause further damage.

"This will be important not only in traumatic brain injury and stroke treatment, but for many acute injuries of any organ or tissue and in medical procedures such as organ transplantation," he said. "Anytime tissue is stressed and thereby oxygen-starved, superoxide can form to further attack the surrounding good tissue."

The researchers used an electron paramagnetic resonance spectroscopy technique that gets direct structure and rate information for superoxide radicals by counting unpaired electrons in the presence or absence of PEG-HCC antioxidants. Another test with an oxygen-sensing electrode, peroxidase and a red dye confirmed the particles' ability to catalyze superoxide conversion.

"In sharp contrast to the well-known superoxide dismutase, PEG-HCC is not a protein and does not have metal to serve the catalytic role," Tsai said. "The efficient catalytic turnover could be due to its more 'planar,' highly conjugated carbon core."

The tests showed the number of superoxides consumed far surpassed the number of possible PEG-HCC bonding sites. The researchers found the particles have no effect on important nitric oxides that keep blood vessels dilated and aid neurotransmission and cell protection, nor was the efficiency sensitive to pH changes.

"PEG-HCCs have enormous capacity to convert superoxide to oxygen and the ability to quench reactive intermediates while not affecting nitric oxide molecules that are beneficial in normal amounts," Kent said. "So they hold a unique place in our potential armamentarium against a range of diseases that involve loss of oxygen and damaging levels of free radicals."

The study also determined PEG-HCCs remain stable, as batches up to 3 months old performed as good as new.