VFH and UFH portions of the radio spectrum are reserved for over the air television broadcasts and the FCC keeps plenty of space between channels to prevent interference.

But unused UHF TV spectrum could be used for fat streams of data over wireless hotspots that could stretch for miles, according to a presentation at the Association for Computing Machinery's MobiCom 2014 conference.

Researchers from Rice University's Wireless Network Group unveiled a multiuser, multiantenna transmission scheme for UHF, which combines several proven technologies that are already widely used in wireless data transmission. One is "multiple-input, multiple-output" (MIMO), a scheme that employs multiple antennae to boost data rates without the need for additional channels or transmitter power. MIMO allows for a larger wireless "pipeline," and the technology is standard in the latest generation of wireless routers and networking equipment. 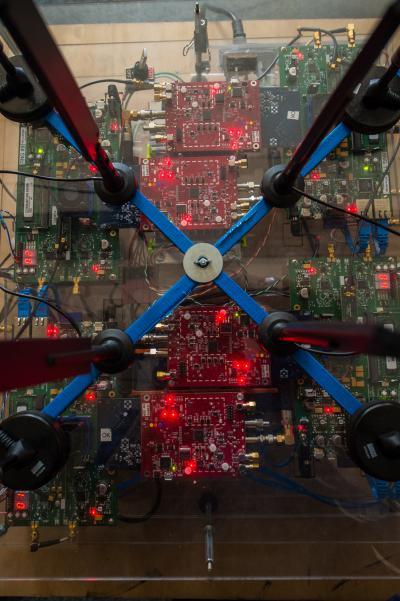 Parts of the UHF spectrum were opened after the recent switch to digital television, which has a smaller broadcast footprint than analog TV. UHF is often referred to as the "beach front" portion of the wireless spectrum because the signals travel for miles, and one popular idea for the liberated portion of the spectrum is for "open" wireless access points like those used for today's WiFi hotspots.

"The holy grail of wireless communications is to go both fast and far," said lead researcher Edward Knightly, professor and chair of Rice's Department of Electrical and Computer Engineering. "Usually, you can have one or the other but not both. Wireless local area networks today can serve data very fast, but one brick wall and they're done. UHF can travel far, but it hasn't had the high capacity of WiFi.

"This provides the best of both worlds."

Using UHF for broadband Internet is particularly appealing for rural areas where wired brandband is unavailable.

"When comparing UHF and WiFi, there's usually a tradeoff of capacity for range or vice versa," said Rice graduate student Narendra Anand, the lead author of the new study. "Imagine that the WiFi access point in your home or office sends data down a 100-lane highway, but it's only one mile long. For UHF, the highway is 100 miles long but only three or four lanes wide. And you cannot add any lanes.

"To be able to leverage the best characteristics of the UHF band, we need to be able to efficiently use the lanes that we have," Anand said. "One way to do that is with multiuser MIMO, a multiantenna transmission technique that serves multiple users over the same channel simultaneously." Knightly, Anand and Rice graduate student Ryan Guerra designed the first open-source UHF multiuser MIMO test system. Based on Rice's "wireless open-access research platform," or WARP, the system allowed the team to perform a side-by-side comparison of multiuser MIMO for UHF and for both 2.4 gigahertz and 5.8 gigahertz WiFi.

"Based on over-the-air experiments in a range of indoor and outdoor operating environments, we found that UHF-band multiuser MIMO compared favorably and produced high spectral efficiency as well as low-overhead wireless access," Knightly said.