Tweet
One of astronomy's big questions is why galaxies forming as recently as 1 billion years after the Big Bang contain so much dust. The leading hypothesis is that supernovae, stars that explode at the end of their lives, contain large amounts of metal-enriched material that, in turn, harbors key ingredients of dust, like silicon, iron and carbon.

When a supernova explodes, the materials in its center expand and form dust. This has been observed in several young supernova remnants - such as the famed SN1987A and Cassiopeia A. In the turbulent supernova environment, scientists expect the churning dust to be destroyed. "That is theoretically," said lead author Ryan Lau, Cornell postdoctoral associate for astronomy. "There have been no direct observations of any dust surviving the environment of the supernova remnant ... until now, and that's why our observations of an 'old' supernova are so important."

Using FORCAST (the Faint Object Infrared Camera Telescope) aboard SOFIA (the Stratospheric Observatory for Infrared Astronomy), a modified Boeing 747, the astronomers examined Sagittarius A East, a 10,000-year-old supernova remnant near the center of our galaxy. SOFIA was needed because no space-based telescope can observe at far-infrared wavelengths, and ground-based telescopes are unable to observe light at these wavelengths due to the Earth's atmosphere. 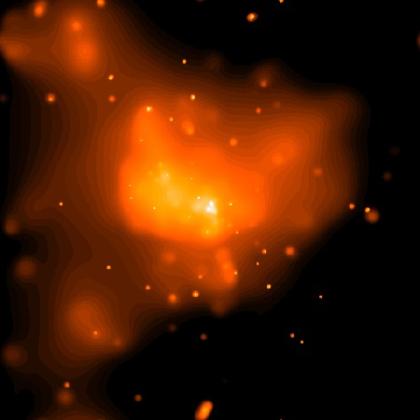 This Chandra X-ray image unrelated to the current paper shows the relationship between the black hole Sagittarius A* and the supernova remnant Sagittarius A East, both of which are located in the center of our galaxy in the constellation Sagittarius. The emission from the supernova remnant Sgr A East is depicted by the bright yellow and orange tones in the middle of this image. From the Chandra image, scientists can clearly see that Sgr A East surrounds Sgr A*, the Milky Way's central black hole found near the white dots in the lower-right portion of the central object. With Chandra, astronomers found hot gas concentrated within the larger radio shell of Sgr A East. The gas is highly enriched by heavy elements, with four times more calcium and iron than the Sun, and that confirms earlier suspicions that Sgr A East is most likely a remnant of a supernova explosion. Credit: NASA/Penn State/G.Garmire et al.

"Dust itself is very important because it's the stuff that forms stars and planets, like the sun and Earth, respectively, so to know where it comes from is an important question," said Lau. "Our work strongly reinforces the theory that supernovae are producing the dust seen in galaxies of the early universe,"

The latest from the scientific community across the world. These are unedited and unfiltered so caveat emptor, even though this is all free....