A team of researchers at Harvard University have modeled in the laboratory a primitive cell, or protocell, that is capable of building, copying and containing DNA.

Since there are no physical records of what the first primitive cells on Earth looked like, or how they grew and divided, the research team's protocell project offers a useful way to learn about how Earth's earliest cells may have interacted with their environment approximately 3.5 billion years ago.

The protocell's fatty acid membrane allows chemical compounds, including the building blocks of DNA, to enter into the cell without the assistance of the protein channels and pumps required by today's highly developed cell membranes. Also unlike modern cells, the protocell does not use enzymes for copying its DNA. 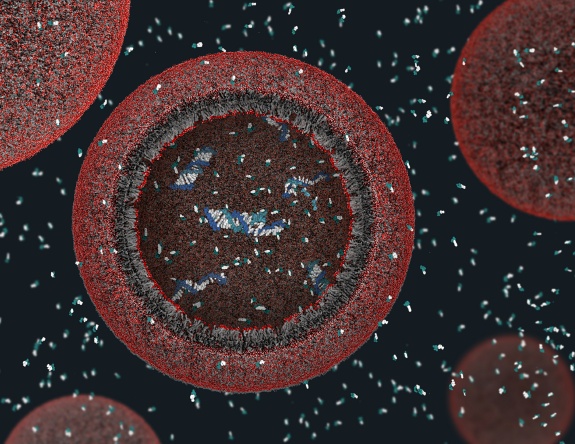 Supported with funding from the National Science Foundation and led by Jack W. Szostak of the Harvard Medical School, the research team published its findings in the June 4, 2008, edition of the journal Nature's advance online publication.

"Szostak's group took a creative approach to this research challenge and made a significant contribution to our understanding of small molecule transport through membranes," said Luis Echegoyen, director of the NSF Division of Chemistry. "This is a great outcome of NSF's support of basic research."

Some scientists have proposed that ancient hydrothermal vents may have been sites where prebiotic molecules--molecules made before the origin of life, such as fatty acids and amino acids--were formed. A theoretical scenario is one in which fatty acids are formed on the surface of minerals deep underground, and then brought to the surface by the eruption of a geyser.

When fatty acids are in an aqueous environment, they spontaneously arrange so that their hydrophilic, or water-loving, "heads" interact with the surrounding water molecules and their hydrophobic, or water-fearing, "tails" are shielded from the water, resulting in the formation of tiny spheres of fatty acids called micelles.

Depending upon chemical concentrations and the pH of their environment, micelles can convert into layered membrane sheets or enclosed vesicles. Researchers commonly use vesicles to model the cellular membranes of protocells. This animation created by Iwasa shows how vesicles may have been formed.

When the team started its work, the researchers were not sure that the building blocks required for copying the protocell's genetic material would be able to enter the cell.

"By showing that this can happen, and indeed happen quite efficiently, we have come a little closer to our goal of making a functional protocell that, in the right environment, is able to grow and divide on its own," said Szostak.